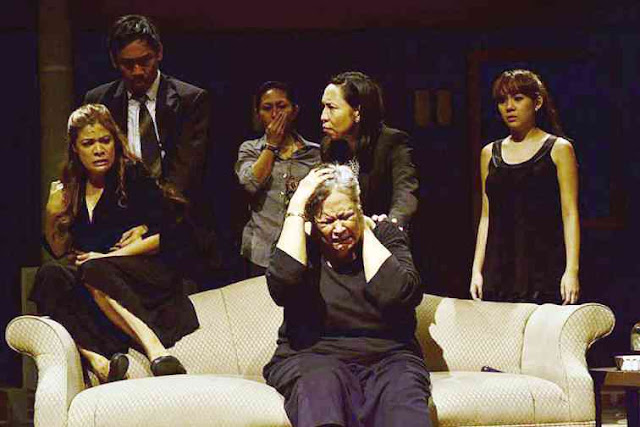 Over the past few years, Tobie and I have made it a habit to do our best to catch all 3 plays of the regular season of Repertory Philippines. This blitz normally runs mostly during the first quarter of the year when Rep stages 3 plays, not counting the two musicals later in the year. Repertory plays are some of the cheapest around as orchestra center seats are rarely more than P1000 as shows are typically performed at the OnStage Theater in Greenbelt 1.

In recent years, most Rep shows tend to end with the cast taking the time to thank the audience for watching. Then they usually ask folks to spread the word about the show on social media using hashtags like #ComeHomeToRep, #BringAFriendToTheTheater and #MakeTheaterAHabit, to name a few. I get the need to leverage all the word of mouth that you can, but at the same time it does feel a little sad and sometimes a little desperate.

But I totally understand why they need to do this. I'll admit that Tobie and I watch more out of habit than actually going out of our way for a particular show since you don't exactly hear a lot about their upcoming productions in regular news channels or on social media. They could really use the marketing boost to help fill up the many empty seats that Tobie and I encounter every time we watch a show.

And I do feel bad about this for a number of reasons, chief among them the sense of loss and regrets over the wasted opportunity as they have been staging some excellent shows in recent years. In 2014 they had great runs of August: Osage County and Noises Off that we really enjoyed. 2015 included the brilliant comedy Run For Your Wife that was one of their best shows for that year. 2016 had the rather endearing Almost, Maine and the bonus musical Stepping Out, which was also quite the delight. And they certainly started strong with Vanya and Sonia and Masha and Spike, that was way funnier than I expected it to be.

Sure, it's easier to want to keep up with adaptations of Broadway Musicals that are staged by local companies or brought here by groups that tour the region. But their commitment to putting up straight plays, many of them Tony Award Winners or Nominees, is something to be admired and I do wish more people would take the time to watch their shows and continue to support the group. And I guess this is part of the reasons why I'm writing about this now in the hopes of helping to get the word out before it's too late t do so. Tobie and I will continue to do our best to support the theater company by watching their shows and trying to get others to do the same.
all the world's a stage cultural victory inner ramblings Tobie