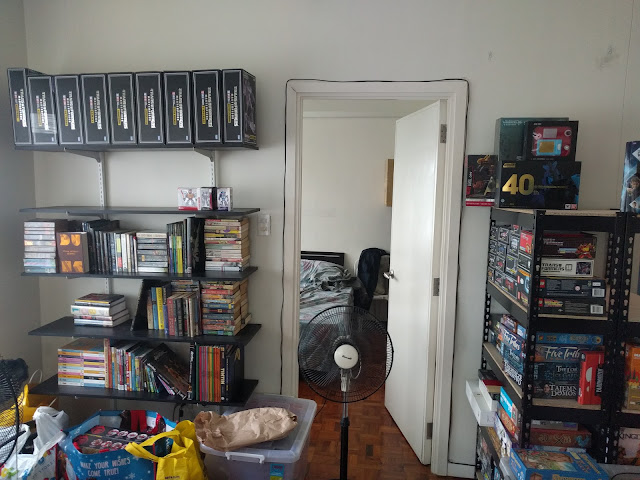 Had a fun 7th Sea game session last night after 2 months away from the realm. I have a much better grasp on my foppish noble character who uses his panache and flair to get his way rather than a sword. And this is a little tricky since it's a pirate-flavored swashbuckling game so there's a fair amount of danger to be dealt with.

My favorite scene last night involved being assaulted by a fearsome character who wields a large butcher's cleaver. She already had me in her grasp with 5 raises but I managed an opposing intimdate roll also with 5 raises. So she was invested in physically pinning me down while I was acting all disgusted and aghast and tried using my noble bearing to intimidate her and scare her off. And because of the nature of the game, it totally worked. And that was just magical.

We also hauled a few more bags of stuff over to the new place after the game and so the shelves area really filling up. And since we're having guests over for board games, we also worked on clearing more of the balikbayan boxes of stuff and so we're starting to see a lot less boxes and a lot more geekery on the shelves. We still have quite a ways to go but I'm really happy with our progress.

But I'll keep things brief for today. I still want to be able to join the games and it'll be better if we clear my laptop off the table.
gaming sietch life tabletop gaming