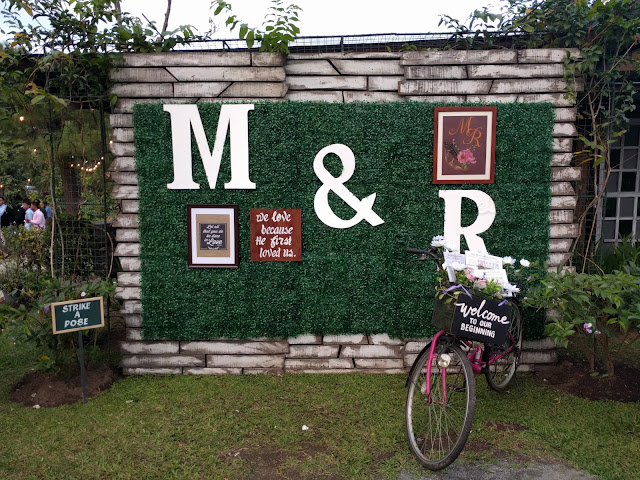 So the team attended a wedding today, right in the middle of the work week. We're a relatively small company and managed to ship the bulk of the Manila team over to the out-of-town wedding venue - it's the first company wedding after all. It probably helped that this week is also the lead-up to Chinese New Year, which is a lot bigger in Singapore versus here in Manila. But yeah, this was definitely more of an exception than a rule for moving forward. We were lucky that things came together the way they did.

It was a lovely ceremony and the whole place had elements that felt like they had jumped right off a Pinterest board, which was part of the pegs that inspired this wedding for sure. We had a good time as a group even though we didn't know anyone else apart from the groom and his parents. But hey, that's all part of the territory when your table designation is in the name of the company and not as individuals. We even had our photos with the couple as "office mates of the groom."

A lot of good feels today. Weddings can be long and boring and tiring but that doesn't mean they aren't magical at the end of the day. And we certainly felt some magic here.

The biggest magic may have been the weather that totally supported this garden wedding. It was raining fiercely on the way to the venue and apparently it had been raining until noon at the location itself. But things came together and come the time for the ceremony it actually got a little sunny, making for a great afternoon indeed. Life is funny that way.
inner ramblings run the world work