0234B: GoChef Experiments and Creations 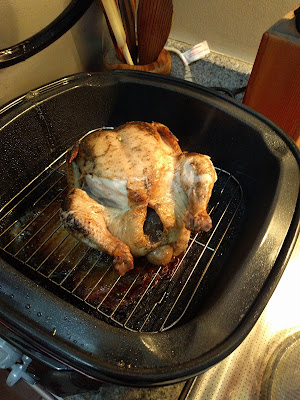 So for Christmas my sister gave us a GoChef, which is one of those As Seen on TV 8-in-1 cookers that promise to become the last appliance you'll ever need for a number of things. Part hot plate and part steam chamber, the device is proving to be most useful at home.

Thus far we've used it to bake, steam, slow-cook, fry and roast food. For those functions alone it is proving quite handy and given our limited counter space it nicely replaces the need for our old oven toaster, a turbo broiler or a standalone steamer, as I was hoping to get last year.

Ever since the move to the new Sietch I've only used the oven range to cook rice, which is a cooking function I think a taller, narrower cooking chamber is better suited to given the limited quantities of rice that we cook.

But yeah more and more it's becoming our default cooking device at home, especially since the ceramic inner bowl is ridiculously easy to clean versus your standard non-stick cookware. I'm becoming quite the convert but of course let me continue to experiment with other dishes and see what I come up with.

At least we're using it. Far too often you see people with too many specialized appliances that don't see enough use. This jack-of-all-trades seems like a good compromise across many different functions and nicely supports our efforts to adhere to healthier eating habits.
food adventures health sietch life