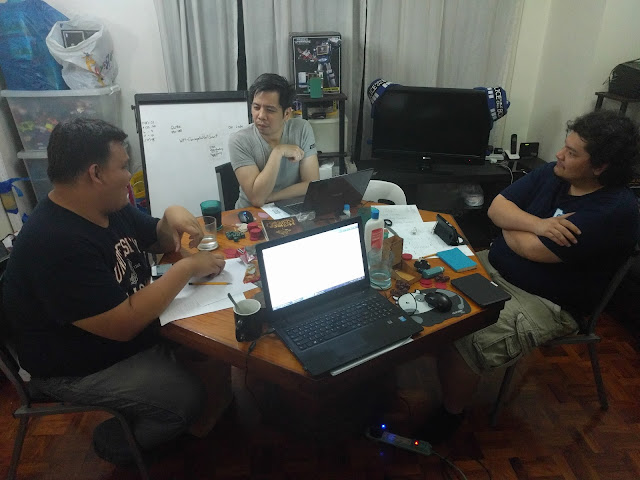 We finally caught up on sleep, which is bliss let me tell you. Although I woke up much earlier than I had hoped to (barely 6 hours of sleep under my belt) I did feel worlds better. Tobie really needed to catch up on sleep given our marathon of activities starting Friday that ran all the way to Sunday morning. But again, totally worth the fact that the Sietch is a lot more like home now and fully capable of supporting game sessions again.

Our first RPG session of the year is a session of Houses of the Blooded with some first-time Houses players. I've made reference to this game system in the past as it's one that we go back to time and time again and it's nice to be back in the world of Shanri. This was originally envisioned as a one-shot game but there's a very big chance that we'll continue on with this as an on-going chronicle.

I'm feeling a LOT better about the new Sietch. Just before the game I took time to setup the water dispenser by running a longer extension card above a door just to bring power to an isolated part of the unit. I also tried the oven for the first time, which was decent enough for cooking rice but a little slow to heat. I am favoring the GoChef for more cooking though as it proved to be quite the versatile cooker. I've already used it to slow-cook and to steam and today I fried some tocino. The non-stick ceramic is a lot easier to clean too so I am very happy with this gift from my sister. It's quite the perfect all-in-one cooker that is pretty useful given the limited counter space in the kitchen.

We still haven't figured out a name for this new Sietch though. Creare will always be the unit in Cubao, so a new name is needed. Maybe Tobie and I will figure out something later on when we're more settled. There are still things that need to be moved over and we also need to figure out storage of the rest of things. But a name will really lock things in for us.
gaming sietch life tabletop gaming Tobie