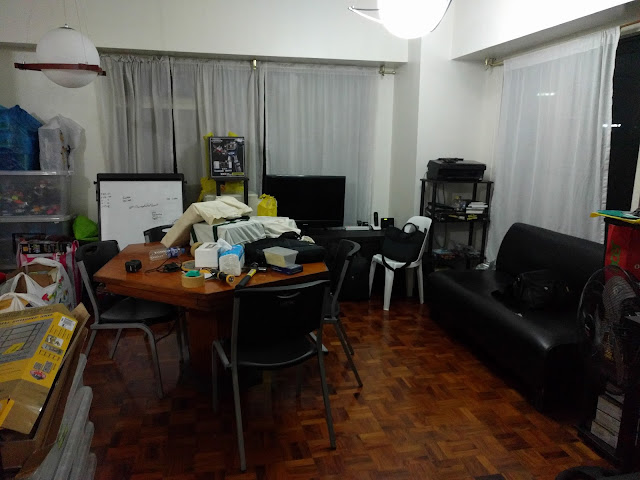 So we've barely had a few hours of sleep and our on our way to a friend's place for a game night scheduled last month. Despite the craziness of the past 24 hours we're determined to make it even if we're not at our gaming best. It's the company that matters more of course, not just the winning.

The reason we were up so long is because of an interesting conflux of events.

First there's last night's O Bar night for a Balikbayan friend back in town for a week or so. The group was determined to get him to go to O Bar and we naturally wanted to support that since we love sharing our love for the bar with others. We hadn't been to O Bar since the New Year so it was nice to be back. The performances were amazing. The company was excellent. And we may have had more tequila than planned.

That would have been okay on its own however we had mad arrangements to move stuff over with the help of another friend -  particularly her FX and driver. We figured it was safer to just start as early as possible after O Bar since we might not wake up in time otherwise. Thus the exodus of items from the old Sietch began with the key items I had been discussing this week like the gaming table and other fun stuff.

Work progressed quite well and across three trips between Cubao and BGC and I cannot imagine how we could have accomplished things without the help of the extra guys. There were a quirky bunch quick to make jokes but definitely got the job done.

We managed to get the major furniture pieces over along with most of the board games and some of our other collectibles. We definitely have enough to host an RPG session tomorrow as schduled although the players will just need to live with being surrounded by various boxes, bags and other ways we used to gather stuff for transport.

Despite the lack of sleep, we spent some time assembling some of the shelves and putting the house into some semblance of order more for our peace of mind. We're still tired now as we drive down C5 and we're aching all over but it is rather warming to think that the new place is definitely feeling more like home after today's efforts.

We just need to figure out how to haul all of our books (mostly mine) since they're still on the old shelves back in Cubao. But I think we can manage that over the next few weeks.
gaming sietch life tabletop gaming Tobie