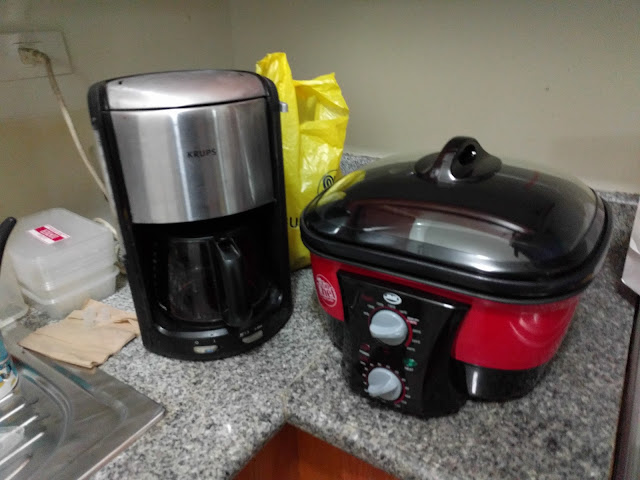 Since we started moving stuff over last Saturday, we've been making daily trips to Cubao to gather more things to bring to the new place. It almost feels like we're stealing from ourselves as we empty shelves and all that fun stuff just to bring them to the new Sietch. It's also tiring.

Yes, this will still be a Sietch as there were many Sietches in Dune Lore. We had intentionally chosen the term given its transient nature as we had always expected to move sooner or later. But Sietch Creare will always be the place in  Cubao. Now we need to figure out what will define this new space for us. Definitely something to think about.

I ended up working from home for one more day in order to get the washing machine checked out. It had been buggy as of Monday night but of course it was working fine by the time the technician finally took a look at it. Although he was pretty late for his original appointment, he was quite knowledgeable and he walked me through maintenance activities to help prolong washing machine life. I like little touches like that. And man the washing machine may not be the current model but it does sping something quite impressive.

I also finally tried out the GoChef that Mina had given us for Christmas. I have to admit that it's a fairly impressive device and I did manage to make some decent macaroni within 30 minutes after prepping ingredients. I had even tested the claim that it could cook while the meat was still frozen and it seemed to do well enough, albeit with some stirring. Maybe the stirring was unnecessary, I don't really now. But checking on it and stirring from time to time did make me feel still involve in the cooking process.

And nothing announces that we're really settling in like opening up the gaming calendar for the next month. We still need to haul the game table over  here in order for the place to be fully functional, but I think we'll manage something soon enough.
inner ramblings sietch life Tobie