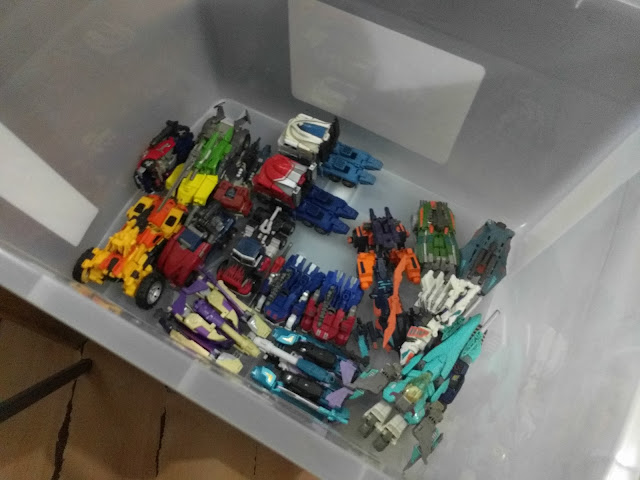 I stayed up all night trying to pack stuff. Clothes were easy enough to sort including discarding stuff we haven't worn in years. I even threw out a vacuum that hadn't been working too well.

But getting my Transformers ready for transport is taking a lot more time. I should have started packing maybe months ago. The figures that have been on display haven't been cleaned in a while so naturally they neeedd to be cleaned before storing since I may not bring them out immediately. Then packing them in a big bin means needing to make sure they're not too much at risk of damage so I end up transforming them first into a configuration that has the least lose ends.

It's just a well. Arrangements to for all the needed gate passes to get stuff out of our present condo then into the new one are taking more time than expected so furniture will have to follow at a later date.  For now we're hauling clothes and smaller shelves that can be broken down and reassembled are making the move.

Internet is scheduled to get moved on Monday so the old Sietch in Cubao will become less functional after that point. But the dining table, which is the center of the daily Sietch experience, probably won't get moved until next weekend maybe. So that does make things a little tricky.

Plus Tobie and I weren't quite happy with the level of cleaning the unit was subject to before turnover, so I suspect we'll clean more before we move stuff. Standards people!

Long story short, no tables and chairs at the Sietch for a while. No entertaining guests until we get things more presentable.
house hunting sietch life