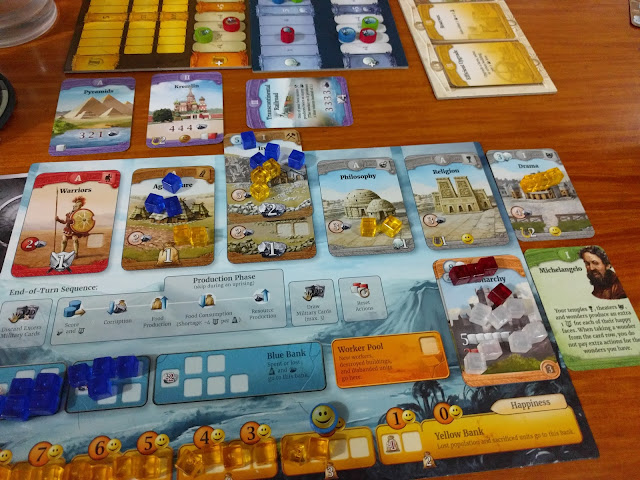 Ever since Tobie introduced me to Through the Ages, I suppose it was inevitable that I'd miss playing Civilization. The board game brilliantly captures a lot of elements of the game in a condensed format that results in 2-3 hours games that may feel a bit long by board game standards but are still quite short by Civilization standards. The board game naturally got me into the mood to play again  but for the most part I held back since who the heck has time to play full strategy games anymore, right?

But then Tobie went on to install Civilization V on his laptop and has been playing this week. That was probably the last straw as hearing him play the game when we're chilling at home watching Netflix is not good for your gaming sanity. I went from overhearing his game to discussing his game to watching him play.

And now I've queued my own copy of Civilization V for installation via Steam. As much as I had bought the collector's edition some time ago, I still ended up buying the game as part of  a larger bundle with additional DLC during one of the accursed Steam sales. It'll take a while to get the game ready even while abusing the faster internet speeds at the office now that everyone has gone home but I should be able to play over the weekend.
computer gaming gaming sietch life Tobie