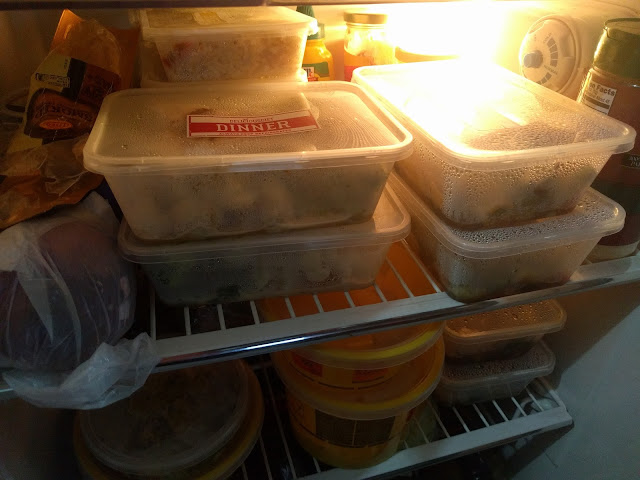 As mapped out last year, this week the goal is to start cooking our own meals instead of relying on Delicious Diet. I can't guarantee that our meals are as healthy in composition, but at least 'we're trying to follow similar portions.

Thus far I'm mostly focused on cooking lunch and dinner meals an thus far I have at least 6 meals sets that should cover me and Tobie for the next 3 working days. I'm about to cook dinner and I'll be sure to set aside some of that for future meals as well.

But today is the first time I've cooked a lot just for the sole purpose of packing stuff for later eating. It was nice to mix and match stuff like how the dory fillets that I steamed were in one dish with brown rice and sauted sayote and ground pork while other fillets rest on a bed of cauliflower and broccoli with some sesame mayo dressing. I cooked a whole batch of chop suey with dory instead of pork and that got divided into two separate meal portions.

But beyond cooking for the future, we're also trying to portion what we eat based on regular meals. Hence last night's pasta dinner had enough left over to be set aside for future meals while managing our dinner from becoming too much. Tonight's dinner will be enjoyed today and will also be saved for revisiting later in the week as a separate meal portion. Exciting stuff.

The only thing that I haven't covered is breakfast and I still need to figure that out. At bare minimum we'll buy bread and just have sandwiches or something. Then again, my portions are a little bigger than what we had with Delicious Diet so maybe it'll be like a brunch instead of a breakfast separate from lunch.

We won't have fancy pastry snacks either apart from Christmas treats that we're still trying to finish. They were nice but not essential.
food adventures health sietch life