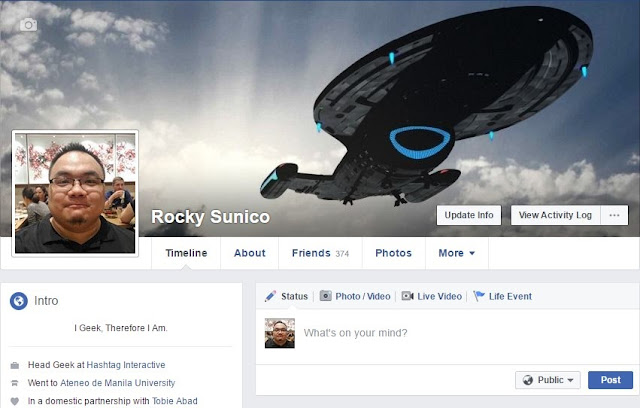 This week, I finally changed my Facebook and Twitter display photos. Ever since Yoshi died I've used our photos together as my profile and cover photos to continue to celebrate him and to remember him. But as 2016 draws to a close I know we need to really start moving on and letting go. We love him and will always love him but he deserves his peaceful rest as well.

We just got the draft contract for the new BGC condo unit and the language includes a no pets clause in the contract itself. We didn't have immediate plans to get a dog but this sort of cements that fact.. The only other option is to consider having a pet at the office but that still doesn't answer the question of weekend care and such. I do miss having a dog but I'll admit that I still don't think we're ready for one. So I guess 2016 will be the year without pets.

I didn't quite know what to pick as a cover photo for my Facebook page. I had considered various images related to our hobbies and interests or even some couple photos with Tobie but ended up with a nice hero image of the USS Voyager. That ship had gone through quite a lot in order to get the crew home and I think we feel like that as well. Tobie and I had been through a bit of a rollercoaster this year as have many other people I'm sure.

But Voyager reminds me that there's always hope. There's always going to be a way home. And that's what matters.
sietch life social networking Tobie Yoshi