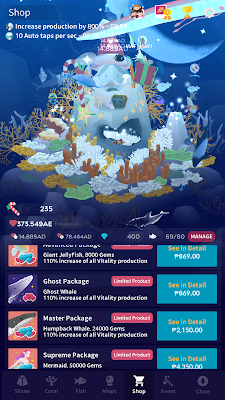 So I've mostly refined my mobile gaming to predominantly casual games, avoiding titles which require more dedicated play time sessions. At most I dabbled with Transformers Earth Wars for a while, but I guess the whole Clash of  Clans style gameplay just isn't for me.

I mostly stick to free-to-play games but despite the "Free" tag that comes with them, I have found myself investing money in a few of them as a way of showing support and to unlock limited content. The game that has gotten the most money from me is Doctor Who Legacy while Spider-man Unlimited has managed to get some of my money as well. The Doctor Who investment was easy enough since the game makes a lot of great content available even without paying so it's not a big stretch to want to support the developers that way. Even though I don't play the game as much as I used to, I still keep it installed on my phone for on-going promotions and giveaways mostly.

A game that I've enjoyed as of late is AbyssRium, which is a weirdly relaxing combination of an aquarium game with a clicker game mechanic. You can get away without repeatedly clicking once you have some decent coral growing thus leading to sessions of watching your fish and enjoying the calming music. It's a very beautiful game and one of the most enjoyable aquarium games I've experienced. I reached the game's "end state" around Halloween and thus my playing slowed down without more goals.

I started playing again since their Christmas event is now active and there are a few new fish added into the mix of things. But now this has me thinking about the premium fish that can only be unlocked through direct purchase with real money. I've done my best to avoid getting them but technically the game will never finish until one gives in and buys them. And I am a bit of a completist.

On the one hand, I always feel guilty about mobile game purchases since it's paying real money for virtual goods. But Tobie always points out that it's more about supporting the development team behind the free game, as he is part of the industry after all. It's an easy enough justification for things and I have indulged in a few lifetime membership scriptions for things like Star Trek Online and the brain game app Elevate.

But the fact that I'm writing this post really just means I'm going to give in soon and buy some special fish. I'll probably start with the mid-tier ones and save the bigger ones for a rainy day or something. I'm indulgent but I'm not exactly crazy.
gaming inner ramblings sietch life