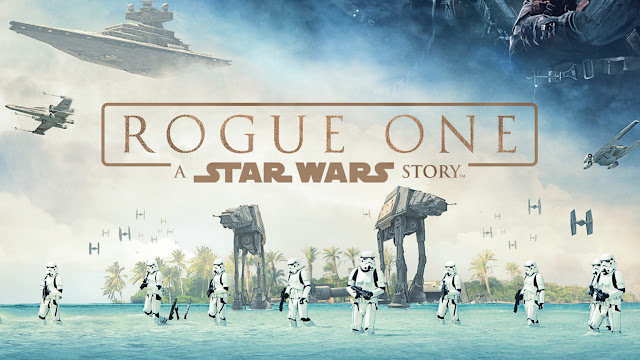 Last night Tobie and I caught a midnight screening of Rogue One together with his officemates. While some folks may remember that I'm quite the Trekkie, this does not mean that I can't also be a Star Wars fan. In fact, I own a pretty robust collection of Star Wars novels that have been ejected from established canon and are now only known as Legends.  I like each franchise for very different reasons and that's the joy of being a geek - we're not necessarily one-trick ponies.

What I've always liked about Star Wars is how it was crafted to be cinematic. The scope of the story is both grand and yet concise enough to fit within the run time of a movie. There's a larger universe in play and yet the story scope remains very character-focused. And Star Wars has handled that pretty well and that cinematic spirit carried on through most of its other iterations across other platforms like TV and the books.

Rogue One was a great movie. It was a different sort of Star Wars experience that found a particular niche to squeeze itself into. It's a blip in the full timeline of the Star Wars universe but it's that is expanded into a beautiful masterpiece that can be explored from all angles. It has a rich cast of characters that have to work together to get a single job done and they manage to come together someone.

Plus we get a killer battle sequence at the end that is probably better than some of the battles in the other Star Wars movies. I'm not kidding.

The ending may feel a little cheesy but it's also amazing. It's part fanservice yet also part great narrative resolution to everything that the movie was building up to. I just wish there were more Bothans involved in the whole mission - you know, to die. But that was the second Death Star of course.
inner ramblings moving pictures