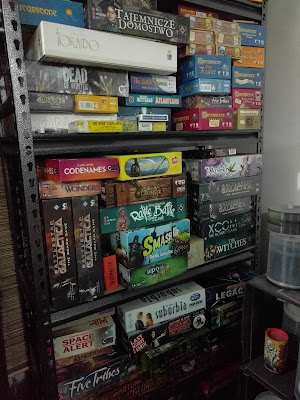 Our weekend is pretty busy given different board game commitments with different groups starting with Twitter friends on Friday night, the FGTC today and our current Vampire RPG group tomorrow. Throw in all the usual holiday stuff like buying gifts, figuring out costumes for company Christmas parties and that other fun stuff and it's hard to imagine where we might pick up some extra time for other things.

December is also the time of the year when I try to finish unboxing and documenting all of the Transformers I've purchased for the year and for one reason or another my queue has gotten pretty significant as I haven't spent as much time "working" with my Transformers. I know I'm going to end up cramming most of that photo documentation work in the last days of the year, around the time the office goes on it''s annual holiday break.

So little time, so much to do.

For now I just need to get this blog post out of the way, deal with my daily Elevate brain challenges and get ourselves over to BGC for the game night we're already late for. I had hoped to wake up early enough to squeeze in some weekend work but then I had gone back to sleep even after Tobie had tried to wake me up before he stepped out for errands. Such is life.
gaming holidays sietch life tabletop gaming toys Transformers