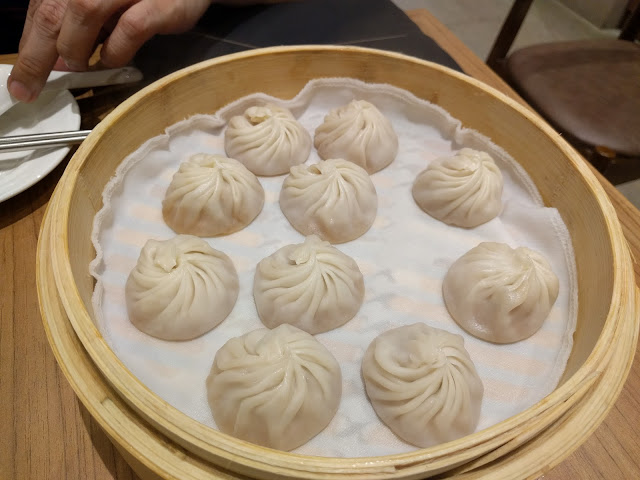 Last week Din Tai Fung opened it's second Manila branch right near the office in BGC. Tobie and I didn't bother with the launch week madness and ended up going out for xiao long bao last night after work. Sure it was not part of our on-going Delicious Diet meal plan, but it was worth the quick escape.

We were lucky enough to avoid the queue since it was a lower volume period and got seated soon enough. Since we had already eaten our assigned dinner meal, we decided to just focus on Xiao Long Bao and the Golden Lava Salted Egg Yolk Buns. I had hoped for our usual Steamed Vegetable and Pork Dumplings, but for some reason it wasn't part of the BGC menu and yet we had it at the SM Megamall branch. Quirky - now I want to find time to revisit the Megamall branch to check if it's still there.

At least we didn't gorge ourselves. We're learning to keep our portions to be more reasonable when we eat out and admittedly there is somewhat less of a desire to eat as much as we used to.Perhaps a month on Delicious Diet has helped us adjust our intake expectations somewhat. It's still pretty easy to fall off the wagon at this point so we're doing our best to maintain some semblance of discipline on weekends when we don't have assigned meals.

On a side note, I'm kind of tempted to get an electric steam cooker for healthier cooking. And if the move to the BGC finally pulls through, it seems that we might as well explore other cooking methods as most condos don't allow gas-based stoves like the one we have now. While I'm sure we'll get either an electric range or maybe even an induction cooker, but things like ovens and steamers may help us on the side.

The hunt for a new home is still on-going. The few times I've gotten super excited about a unit, it seems someone comes along and snatches it up before I can even schedule a viewing. And I've been relatively aggressive in pursuing different brokers and inquiring into different listings. But the market is just that volatile and I guess a lot of folks really want to move to BGC like we do. But we'll keep at it. I feel like I'm close to finding something. Maybe.
food adventures health house hunting sietch life Tobie