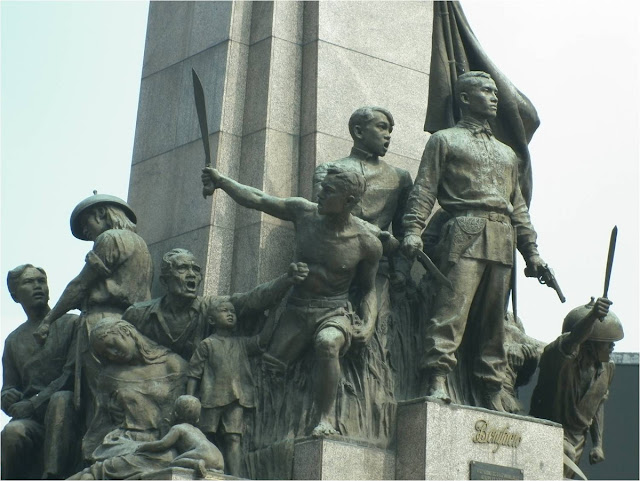 Today is Bonifacio Day, a national holiday dedicated to Andres Bonifacio, popularly known as "The Father of the Revolution". Today is also the day when anti-Marcos groups have designated as another protest day against the decision to bury former dictator Ferdinand Marcos at the Libingan ng mga Bayani (Heroes' Cemetery).

Bonifacio is an odd hero since we all remember him for his heroism and being at the forefront of the fighting against the Spaniards but we don't always think about the circumstances of his death. He was executed for treason by Emilio Aguinaldo, who became the first official President of the Republic of the Philippines. Many historians argue that the trial was a farce and a blatant move by Aguinaldo to consolidate power by killing a rival. And yet we still celebrate both as heroes for the most part despite the less than ideal reasons for Bonifacio's death.

At the same time we have a big protest movement today that also keeps in mind what history may say of us in the future. It can be argued that the technicality that allowed for Marcos's burial at the LNMB may have technical legal merit, the principle of things is still in question and what this is all supposed to mean. Sure, being buried at the LNMB may not theoretically make you a hero automatically, it's not too far-fetched that future generations will blur the lines until a new version of events is taken as truth. If we could whitewash the history of the betrayal of Bonifacio, why then can people argue that the burial won''t contribute to similar revisionist actions in the future?

This again brings to mind the odd foreword included in the often-utilized historical textbook, History of the Filipino People by Teodoro Agoncillo, that argues for the need for history to serve a purpose as related to nation-building. While the theory behind it seems noble, at times it can also be interpreted to be problematic as it supports historical revisionism in service to creating some sort of a national identity for more people to relate to. The tricky thing there is how do we define the nation that the historical text wants to build? What if that concept of a unified nation is one that has erased the sins of the Martial Law years under the Marcos Family? Is that the sort of nation we want to build?

And this is why the protests matter - people fighting to ensure that Marcos is remembered as the villain he is and the nation is steered away from falling into the trap of martial law once more. And given the troubling news as of late involving bomb threats and other "destabilization efforts", it's not too much a stretch of the imagination to see the rumblings of Martial Law rearing its ugly head with Duterte leading the charge. He has literally stated time and time again that he'd be totally willing to go down this path in his supposed war on drugs.

But we will never forget. Never again will we allow the abuses of Martial Law to be repeated. We're not that stupid...aren't we?
holidays inner ramblings stop the presses