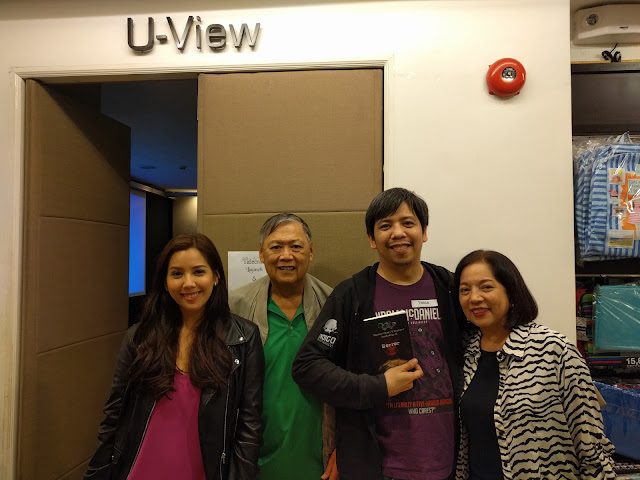 I'm undecided as to what one thing to write about today so instead I will write about many things.

Yesterday Tobie had another book launch event for Talecraft as his short story was selected for their horror anthology. This is his second time to participate and it was nice to be there for him. Of course such moments also remind me that I haven't done any serious creative writing in quite a while now (think years) and I'm not entirely sure how I feel about that. A part of me feels regret and yet the rest of me is a little less affected. I write a lot in my blogs and I still feel fulfilled doing this so maybe my calling involves more expository writing than creative narratives? This could be yet another reminder to myself to just shut up and write but at the same time it's not like I have stories running through my brain these days. Sometimes I struggle to figure out what to write about in this blog.

After the book launch I joined Tobie's family for dinner. This is not our first dinner together - we did the same thing after the launch book launch, for example. But I still get nervous since I know that Tobie's parents are still getting used to the notion of us being together and that this is really a long term thing given our seven years together. But I also recognize this as some sort of progress and Tobie keeps teasing me for all we know I may soon be invited to family gatherings over the holidays. I know we're not there yet, but the thought is a little distressing. I wouldn't know how to respond..

Last night we celebrated a friend's birthday with a great board game night. Once again I suspect I ate too much and my weigh-in upon waking was less than satisfying. Why is it that one night of eating can have such a significant effect? Such is life, but the indulgence was worth it given how much fun we had last night. Good times.

Today we're playing Blood & Honor and I'm trying to keep the mindset of a medieval samurai. I really enjoy this game and the setting and our noble clan is definitely the sort full of story potential. We're already laying the seeds for a lot of tricky story lines and I can only wonder how things will end up in the long run.

I wish I had more time to unbox and play with my Transformers and LEGO Dimensions figures. But time is such a precious commodity indeed.
console gaming family gaming LEGO tabletop gaming Tobie toys Transformers writing