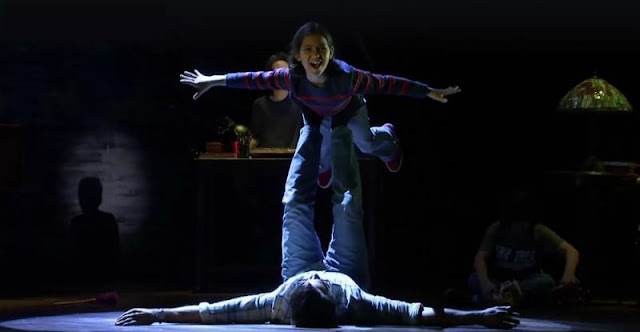 Last night Tobie and I were fortunate enough too catch the local staging of Fun Home, the musical based on the autobiographical graphic novel of Alison Bechdel. It's a great play and I was left with so many thoughts and feelings in my head and I knew I wanted to write about it. But where to begin?

Fun Home is a perfect storm of things that make me feel many, many, many things. It's a story about growing up LGBT and taking those steps out of the closet. It's about repressing your gender identity and expression by hiding and living double lives. It's a story about families and the quirks that become visible when you take a closer look. It's about fathers and the relationships we have with them and the words left unspoken. So yeah, a lot of feels indeed.

Given the general global views when it comes to the LGBT community, there is no clear-cut guide to growing up gay. The first stage is always denial of course. You question yourself and deny that you might be gay. Some family may go through the same reactions and doubt the veracity of your self-assessment of your gender. And that's tough when you get down to it. It's hard enough to figure out things for yourself. It doesn't get any better when other people - especially those you consider closer to you - challenge your newfound realizations and revelations. And it happens over and over again to many LGBT youth or even for older ones who take longer to leave the closet.

Society isn't quite there yet in terms of figuring out how to deal with people who realize they're LGBT. There are families that show a lot of support and there are those that show support but also view it as some sort of spectacle or form of entertainment. A lot of mistakes have been made and are still being made and will be made as we figure things out. And not all of them can be condemned as being strictly bad or wrong - a lot of well-intentioned efforts can go terribly wrong. But everyone still learning how to deal with this. We don't have clear best practices just yet. We don't have a roadmap to figuring things out. We're still dealing with labels!

And that's a last point that came to me while watching the play. I've countered a number of folks who say that labels are restrictive and that they don't matter and all that. But you know, the play reminded me that labels may not be perfect but they do serve an important role in helping individuals figure things out. It's important to be able to say things like "I'm gay" because of what that means and to feel like you've been counted among many others whoa re gay too. Maybe your view of yourself will change over time but at that moment as you try to figure out whether or not you're LGBT, labels can help. And for those people who continually argue that they don't want to label who they are or what they do with other people, a lot of times that refusal to be categorized is a form of self-denial. If you can't accept who you are enough to put a name or label to it, then maybe you need to reflect more.

There are so many other things I probably want to talk about and there are things that I had mapped out but have forgotten since last night. Or maybe I need to sit down with other people of the queer community who have seen the play and just have a long conversation with. Probably not going to happen given how busy life is but it's something to think about.
all the world's a stage cultural victory inner ramblings queer life