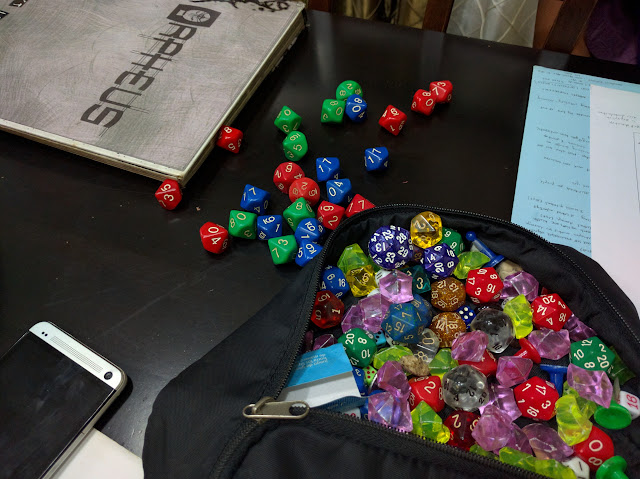 People play tabletop role-playing games (RPGs) for different reasons. Some want to apply tactical knowhow in figuring out a way to win a complex battle. Others wish to explore alternate histories and far-flung locales through the eyes of their characters.

More and more I find enjoyment in challenging myself to become someone else. The role-playing aspect in itself is what gives me the most fun and I've come to try and challenge myself by playing stranger and kookier characters.

Sure, I've argued that you always play your true self when gaming, and I believe that still holds true. Our conflict resolution approaches in life still manifest in gaming. But there's still the conscious effort to play another role as any theater performer knows. That's what I tend to indulge in, at least in recent years.

Since I get to play in so many different games with Tobie, I'm fortunate enough to have more opportunities to try new character concepts. In the beginning it was about exploring characters I wanted to be more like. These days I play some pretty strange characters that are way different from anything I would do. At times they feel a little shallow and satirical. Later on though I figure out how to make them more realistic and a bit more grounded. And things become even more fun that way.

With so many concurrent games on the calendar, there's often a need to juggle characters and make sure that I don't mix them up too much. It always takes a turn or two before I fully get back into character but it's good fun. And seeing where the character will take me is even more fun.
gaming tabletop gaming