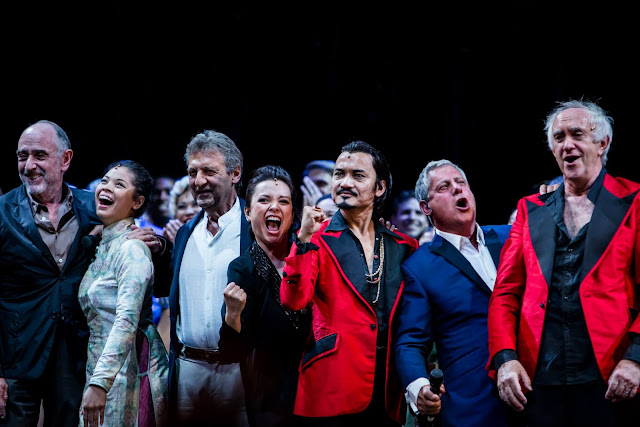 So we paid for overpriced movie tickets to watch a recording of an anniversary performance of a stage musical. I was a little skeptical at first about patronizing SM for this exclusive screening they had managed to arrange and we almost didn't get to see it since we ended up needing to sleep in last Sunday instead stepping out to see it. However when the screening got extended for a few more days I figured it was enough of a sign to go for it. Thankfully Tobie and I were able to align schedules to pull it off.

I'm no stranger to recorded-as-live stage performances - it's in this manner that I was first introduced to much beloved plays like Pippin and of course Into the Woods and even more contemporary shows like Legally Blonde. But I'm also more used to watching such performances in the comfort of my own home. Watching it in a movie theater with other people felt a little odd but wasn't exactly bad either. It just felt different. It just meant that Tobie and I couldn't go through our usual commentary on how the camera work often takes away from the actual theater experience since the tighter shots don't let you see the big ensemble numbers or the fun set changes.

The 2014 cast was pretty good and they certainly had a great take on the musical. But in truth we all watch this performance for the 25th anniversary gala that comes at the end in order to see the likes of Lea Salonga and Jonathan Pryce reprise their roles. And yeah, it was totally worth going out to see the show given how much they clearly had singing the songs that helped them all step up in terms of musical theater fame.

It all made for an interesting Monday night. And then Tobie and I took a lovely walk from SM Aura back to the office.
all the world's a stage moving pictures Tobie