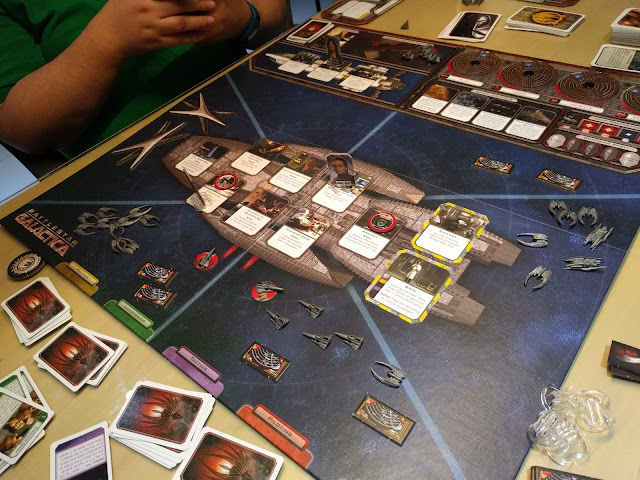 During the recent Gaming Library sale we managed to pick up Battlestar Galactica: The Board Game and its expansions since they were crazy cheap at the time. We knew it was a game about betrayal similar to Shadows Over Camelot but then never rushed to get it since we weren't sure how many folks would want to play it was well. It does support a 2-6 player count, which is pretty robust, but then it also promised to be pretty complicated and thus teaching new players would eat up time.

We finally got to play it during last night's board game night and it was both quite fun and yet also an amazing nostalgia trip. The designers manged to hit all the key points of the show in this game ranging from political factions, secret Cylons, bit space battles and repeatedly needing to make hard choices. So yeah, that's most of the highlights of the show in a nutshell.

Tobie and I first started getting really close to one another around the time BSG's final season was airing. We started to watch those last episodes with the reveal of the Final Five together. We'd coordinate online when we'd "meet" and do our best to sync our two episodes together as we'd watch at our respective homes. And then we'd chat about what's going on and speculate together. So it goes without saying that we have a lot of emotions tied to this franchise.

But then beyond that, the show in itself was amazing and it became this beacon to all other franchises that the reboot could be done well and yet remain highly respectful of all that had come before. It consistently delivered a great storytelling experience albeit with a few plot twists that were controversial at the very least. But good shows really push boundaries like that and do their best to explore new ground.

I really need to find time to re-watch the series, especially as we start to include the BSG board game into our game night rotations.
gaming queer life tabletop gaming television Tobie