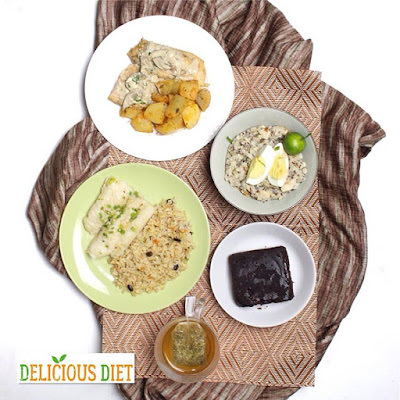 So today was my first day back at work since the Singapore trip and also the first day of our Delicious Diet adventure. Tobie and I stayed over at the BGC office so we could receive the Sunday night delivery and so I could catch up on 2 weeks of laundry that had built up while I was away.

The work day was pretty stressful, mainly because I felt like I had so much to catch up on that had manged to build up while I was training or my Google Analytics certification. So today was all about getting back to this or that client for pending deliverables and some new stuff that came in. My big monster was a report whose coverage spanned all of 2016 thus far and so there was a need to pull out a lot of data and get things together. The irony is not lost on me that the report depended primarily on Google Analytics as well, so I did my best to find tricks that I had learned last week that might speed things along.

Then there's the shift to the diet meal, which is a bit of a big change in itself. For the most part Tobie and I survived the first day, although there has been the inevitable feeling of wanting to eat more than we had. But hey, it wouldn't be a diet plan if we were allowed to eat at our normal levels. I limited myself to nuts as snack food during the really bad spells, although I still allowed myself the indulgence of coffee because there is no way I'm getting through work without at least a strong mug in morning.

I also acknowledge that I'm a stress-eater - or maybe just a work-eater as I do enjoying easy access snacks while hammering away at a report or a proposal. It has been my default work mode for many years now and I can only thank my BPO years for this odd habit. Eating was one of the easier (albeit unhealthier) ways I'd stay awake and so it naturally tied to my routine. And given I had a lot of big tasks to deal with today, not having access to chips or whatever did make me feel a little off-balance.

But I'm sure things will normalize for both work and our new diet. In the short term, I bet I'll get a wee bit cranky during bad moments. But fear not, I tend to hide it well - work is hardly a place for emotional outbursts after all.
food adventures health work