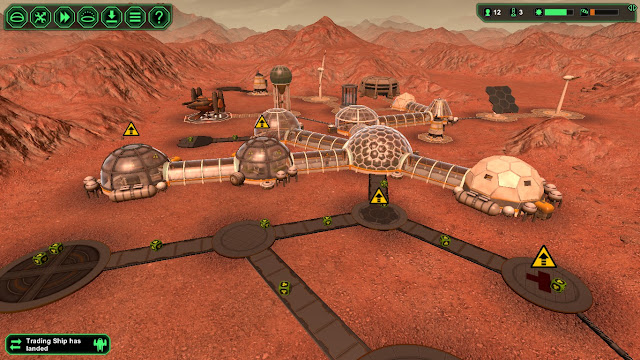 Double Fine's Spacebase DF-9 was the first and thus far only game that I've ever purchased from Steam Early Access. I really liked the concept since it was a pretty novel spin on the whole city-building sort of deal although its problem set felt closer to the likes of Bullfrog's Dungeon Keeper or Theme Hospital. But then that Early Access game pretty much fell apart and I never heard of it again.

Chatter began to circulate about Planetbase being an amazing yet brutal game and I was intrigued enough to put it on my Steam Wishlist but not sufficiently enough to actually research into the game. I finally bought a copy on sale during one of the big sales and only got around to trying it out during this Singapore trip.

And the game is pretty much Spacebase but on Mars and I find that pretty amusing. Sure, it's not as funny as Spacebase was, but it has that same grim survival factor that makes the game both addicting and annoying. I really need to spend a bit more time studying how to make a decent base though - I'v yet to get past my first planet since I keep falling short of certain resources or what have you.

It's pretty fun in a way but it's all really hard. At least in Spacebase my main challenge was managing expansions while dealing with deadlier and deadlier threats. For Planetbase I'm still trying to figure out the balance for decent self-sufficiency and controlled colonist growth. That's not even counting the random rocks falling out of the sky and destroying chunks of my base.