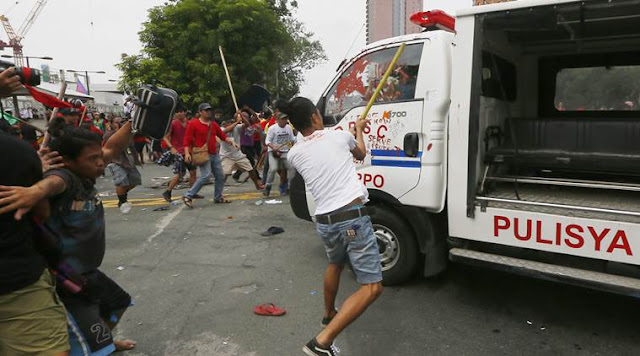 I've never been a big fan of the groups that we generally tag as "activists" in this country - particularly the communist groups. I have my personal reasons for this general unease and distrust, however my feelings have never extended to the thought that they shouldn't be allowed to hold protests and make demands of the government. The very fact that this country remains a democracy means that we still have the right to free expression and the right to assembly as demonstrated by rallies of this nature.

This particular group isn't your run-of-the-mill "we hate the administration" sort of protest from years past, but consists of aggrieved indigenous groups who have come to the capital in the hopes of  being heard. Their concerns are many, but the Cliff Notes version is that despite legislation crafted to project their rights to ancestral lands, they've lost more and more to big business as the government has largely turned a blind eye.

Their protests this week haven't been received all that warmly. First-hand accounts by folks on Twitter shared that they were dispersed by water cannons yesterday while they were at Camp Aguinaldo yesterday. And today at the tail end of their rally at the US Embassy, things turned violent as police dispersal efforts included the use of tear gas and the now infamous incident involving a police vehicle running over protesters.

Rallies will always be complicated for a whole host of reasons. Mob rule is a known thing and a large gathering of both protesters and police forces always results in a rather tense situation where a single mistake can lead to  a whole host of problems. More often than not those mistake tend to involve violence.

I won't get into a who fought first or who started it all sort of discussion - that never seems to end. I will touch on what we expect from the police in situations like this. The Public Assembly Act of 1985 states that "Tear gas, smoke grenades, water cannons, or any similar anti-riot device shall not be used unless the public assembly is attended by actual violence or serious threats of violence, or deliberate destruction of property." It reiterates in Section 11 that, "No public assembly with a permit shall be dispersed. However, when an assembly becomes violent, the police may disperse such public assembly," and lays out specific guidelines as to when this dispersal may happen.

Even without the proper permit, Section 12 is pretty succinct in stating that "When the public assembly is held without a permit where a permit is required, the said public assembly may be peacefully dispersed." The rallyists claim that they were still peaceful and their assembly program was about to end. Media reports claim that the PNP chose to act since rallyists were attempting to enter the Embassy. We're stuck at he said, she said at this point. Stress on peaceful dispersal.

However the  law goes on to provide additional steps that must be followed including repeated warnings to remain calm and to stop acts of violence (such as throwing rocks) or the protest will be dispersed. Most of the videos on social media focus on the incident with the vehicle itself, however the ABS-CBN video also includes some of the actions leading up to it and you can hear the protest leaders trying to calm folks down and for the most part you see people starting to back away from the vehicle before it started going backward.

The police claim that they had to get the vehicle clear since they felt that the rallyists were going to take control of the vehicle and run over the police lines. To be fair, if I were the cop inside the van with the windshield getting bashed in, I'd be pretty nervous and rattled too. However if the goal was to secure the vehicle, then you'd think he'd keep moving backwards and removing it from the scene. Instead he goes forward again. And back again. And forward once more. The official police statement focuses on defending the guy and I suppose that's normal. But man, it's clear to me that the guy probably just panicked and didn't fully comprehend what he was doing. He's still accountable, but I don't automatically think his actions were malicious in motivation. But why couldn't they just admit to that and focus on moving forward and determining how to improve police training so they don't freak out like that.

The Philippine National Police (PNP) does not have the best of track records when it comes to exercising "maximum tolerance" when dealing with protesters over the years and I'm not even going as far back as the Marcos years. Every post-1986 government has had to deal with rallies and protests and we have never managed to refine our police action in terms of how to deal with such public assemblies. More often than not things descend into violence when we need the police to be the ones to take the higher ground and remain calm while dealing with protest groups. They don't get to point fingers and say he or she started it and that they were only defending themselves. That's not the point. the point is that there has to be a peaceful way to resolve things and law enforcement needs to exhaust all such options before resorting to violence. And even when violence is called for, the escalation of threat levels should still follow principles of maximum tolerance.

As we think of all this, I'll leave you with this interesting video of what appears to be Korean police training for dealing with protests turning violent. There always has to be a more peaceful way of dealing with tense situations like this.