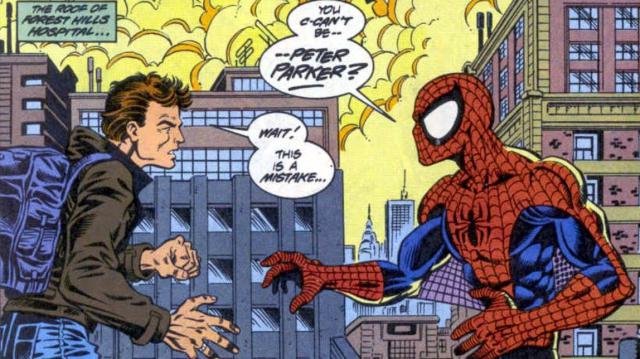 It took me a while before I decided to write about Peter Parker before writing about his clone...or whatever. The Clone Saga in itself is confusing as the by the end we determine that the Peter Parker who married Mary Jane and all that was actually the clone while Ben Reilly was actually the original. But for purposes of this discussion and in line with how they agreed to part ways, we'll continue to distinguish Ben Reilly by continuing to call him Ben Reilly.

As mentioned in a prior blog post in this series, the writers set things so up so that Peter would enter the Clone Saga pretty unhinged and not his cheerful, wisecracking self. And while in this somewhat more aggressive state he meets the still-alive Ben Reilly and the whole thing sets off the saga. Things weren't necessarily too bad at this point.

But we had a lot of weird moments along the way including contracting a deadly virus, getting saved by Doctor Octopus, and numerous encounters with Judas Traveller and the Host and of course Kaine. And throughout the series it seems that more and more he ends up dealing with all these encounters and revelations in increasingly bad ways. As the Clone Saga wore on, he stated to feel less and less like Peter Parker. And I think that's what hurt the storyline as well. I understand trauma he was going through and how that might have an effect on his psyche, but then the extent of his personality shifts really felt beyond even that sort of margin for variations.

And don't get me started on how he takes the news about him supposedly being the clone and Ben Reilly being the original. That was just nuts. That wasn't Peter at all.

The worst part of the Clone Saga was Peter somehow being "genetically programmed" to hunt down Mary Jane and try to kill her based on a trigger phrase that the Jackal stated before appearing to die. Plus said trigger phrase took a few days before it took effect. I don't know how that sort of programming works, but to see Peter swinging across the city as Spider-Man chasing after Mary Jane while asking everyone to stop him from doing just that. Terrible moment in Spider-Man history.

Peter Parker did not deserve the Clone Saga. Then again, no one really did.
books comics Spider-Man