02286: Blogging Through the Clone Saga: The Jackal 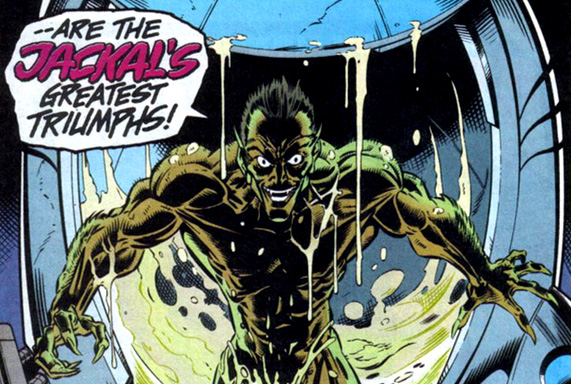 For the most part, the central villain of the Clone Saga was Professor Miles Warren, better known as the Jackal. He was the villain initially responsible for all this Clone nonsense since he first cloned Peter Parker back in the 1970's with the climax of the story in Amazing Spider-Man Vol. 1 #149, I haven't read that issue but what has been established since then is that Miles had a bit of an obsession with Gwen Stacy and resorted to cloning to have her as a part of his life forever.

Fast-forward to the 90's and the Jackal turns out to be alive and so was the clone that had been seemingly defeated in the first story. To push things further, he also performs some feat of genetic manipulation to improve himself into a strange green-skinned creature instead of a simple scientist. This was somehow necessary so that he wouldn't just rely on his genetic creations to actually fight Spider-Man and such.

His motivations for the continuing Clone Saga just weren't all that clear to me even once I got to the end of the story. So he did all this since he blames Peter for Gwen's death maybe? And so he concocted this overly elaborate plot spanning years  just to get back at Peter again? Sure you can go back to the even more convoluted plot thread about all this being a plan set in motion by the formerly dead Norman Osborne, but even that felt like something tacked on after the fact.

And the extent of the Jackal's genetic prowess were more than ridiculous. He could trigger the degeneration of his creations with a snap of his fingers - either that or he had just timed their genetic shelf life to a ridiculous degree of accuracy or something. He created a clone that turned into a monster and then changed him again so that he could "manipulate his genetics" to respond to any situation, thus giving him the ability to go all Mr. Fantastic even. It all just made no sense.

But hey that's the Clone Saga for you. The Jackal was a decent enough one-off villain for minor stories but he never made sense as the mastermind behind this two year disaster of a story. And I think the folks at Marvel figured that out as well and thus the idea to rope in Norman Osborne. Or something.
books comics Spider-Man