02285: Blogging Through the Clone Saga: Kaine 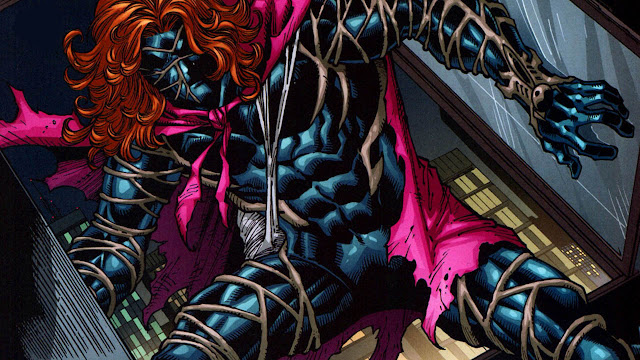 The other prominent character brought to life in the Clone Saga apart from Judas Traveller was Kaine, who was another character totally designed to be all secretive and mysterious. Sure his costume made no sense and he felt more like a Frankenstein-style monster of a sort. But then he had a habit of talking aloud to himself about his immediate thoughts while brooding on this or that rooftop. Or he'd occasionally scream out because of weird visions of Mary Jane dying.

So Kaine started out as this weird who was killing people left and right but later focused on killing Spider-Man's enemies in order to somehow prevent his visions of Mary Jane dying. And all this mattered to him since it was eventually revealed that he was one of the earlier clones of Peter Parker that didn't work out so well.

Oh, and other times he'd seem to be helping either Judas Traveller or the Jackal due to immediate threats or misplaced loyalty. Like Judas Traveller, his motivations were flexible and dependent on the needs of the plot - or at least the needs off the plot of that particular story. And so you can imagine that he had a lot of stupid things to do.

He seemingly died at the end of the Clone Saga, but then he eventually came back. He was magically cured of his genetic deformities during the events of Spider-Island and eventually became a rather intense good guy. Throw in a sexy red costume and he became the new Scarlet Spider. But then Spider-Verse happened and then...spoilers!

So that's Kaine. Or Kaine Parker. He was yet another annoying part of the Clone Saga but he actually made for a great Scarlet Spider later on.
books comics Spider-Man