02284: Blogging Through the Clone Saga: Judas Traveller and the Host 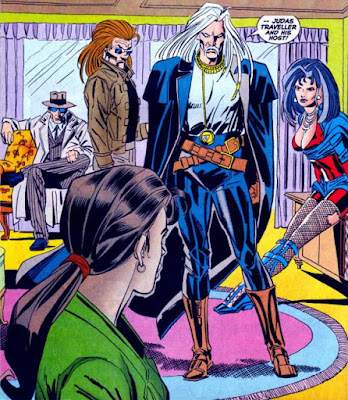 One of the most annoying parts of the Clone Saga was the introduction of the ever-mysterious Judas Traveller and his companions, The Host. Oh how I hated these guys.

Seriously, saying "Judas Traveller an the Host" sounds like the introduction of a heavy metal band or something. And they were pretty much just as ridiculous in reality.

He appeared out of nowhere as part of the Clone Saga study as a famous criminal psychologist asked to lend his expertise to the Ravencroft Institute, which is the Spider-Man equivalent of Arkham Asylum that only really gained prominence during the Maximum Carnage event and of course the Clone Saga. When he arrived it was revealed he was much more than just a psychologist and with him were his "students", which with different abililties or specializations.

Medea and Boone were two mercenaries who could not have been wearing more 90's outfits even if they tried. Chakra could perform feats of astral projection that pretty much made her a messenger. Mister Nacht...took notes. They would get beaten up time and time again throughout the series but no one would ever die or get seriously injured. They would just disappear and reappear at will throughout the series.

What made Judas Traveller so ridiculous was that he sounded like a bunch of fortune cookies mixed in a blender. He was supposedly investigating the nature of evil and his methodology involved studying the inmates at Ravencroft then determining that since Spider-Man was the common thread among the villains, then he needed to study Spider-Man. Throw in seemingly omnipotent powers over all of reality and the enigmatic Scrier as his companion and things just spiraled into weird madness.

And despite seemingly involved he was throughout the saga, in the end his participation led to nothing of merit. Seriously, what was up with this guy? Why did anything think that it would be a good idea to throw him into the story. As the Clone Saga stretched longer and longer, it really started to feel like throwing in Traveller and his crew was a quick fix for not having a decent story.

The Clone Saga was full of a lot of stupid decisions, but this definitely one of the biggest ones.
books comics Spider-Man