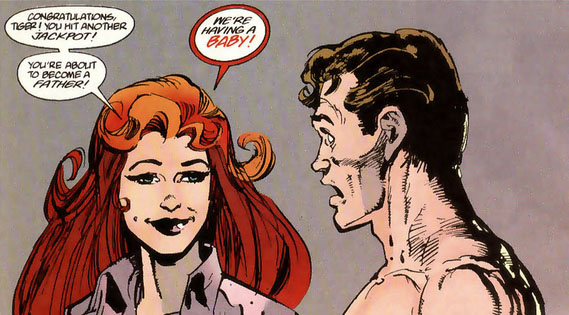 I'm an old school Spider-Man fan and so I'll always feel that Mary Jane Watson was pretty much fated to become the love of Peter Parker's life. Initially a seemingly flaky, reckless party girl, she was later revealed to be a woman of much greater complexity. She's a woman who had a difficult family environment growing up yet still rose above it all. And she's one of the first to figure out on their own who Spider-Man really was.

But in the Clone Saga, Mary Jane got a pretty terrible arc. I was bad enough that she was pretty much powerless when Peter avoided dealing with the fake parents story but retreating into his Spider persona. The news of her being pregnant could have been a wonderfully exciting moment in her life. Instead it became almost a character flaw that dragged her into a spiral of forever being scared for her baby, the revelation that Peter Parker's irradiated blood may cause deformations for the baby also driving her nuts and any number of problems just felt like way too much. She went from being sassy and strong to being depressing and dependent.

Seriously, she didn't even have a major role in the supposed climax when Peter discovers he's the clone and not the original. What's worse is that the story that features her more involves a ridiculous premise for her to run for her life across two issues. Sure it was her quick thinking that resolved the whole situation, but the ending still didn't quite make up for all that had come before. And it was just terrible to see her put in a situation as ridiculous as that.

Mary Jane deserved a lot more than the short stick that she had ended up with. And this is yet another reason why I loathe the Clone Saga so much.
books comics Spider-Man