02281: Blogging Through the Clone Saga: Aunt May 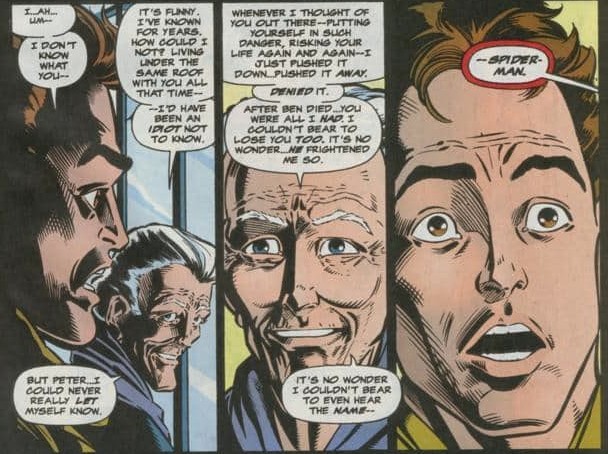 Aunt May's role in the Clone Saga was a somewhat limited one as she died somewhat early in the storyline over in Amazing Spider-Man Issue 400. But her contribution to all this should not be measured by how many issues she appeared in by more by the quality of her involvement.

She had never believed that Chameleon's robots were actually Peter Parker's parents in the lead-up to the Clone Saga. And right before her death, she finally revealed to Peter that she had always known that he was Spider-Man. And that was a pretty big thing to reveal. Her death became yet another source of trauma added to Peter Parker's already colorful life. And that was the big theme of this whole stroryline - to subject Peter to as much trouble as possible in order to drive him to the edge.

Aunt May's plot also involved a lot of weird bits of narration where we were privy to her thoughts while she was in the comatose state that drove the clone Ben Reilly home to New York in the first place. In this regard it felt like she didn't have all that much to do except express a lot of worry about Peter and hoping to be able to get the chance to say goodbye before she'd finally pass from this Earth. It felt a little cheap, but hey it was hardly the worst decision made in this story arc.

If anything, her return to life and her finally talk with Peter more than made up for all those strange coma scenes.

And this is why I continue to hold ASM Issue 400 very close to my heart.
books comics Spider-Man