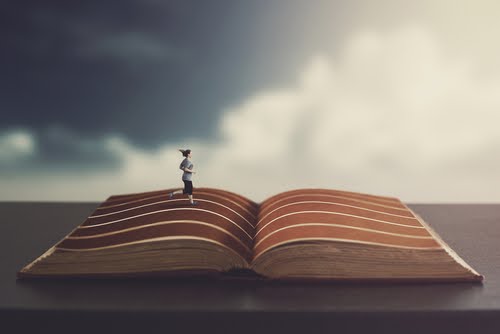 Last night I finished up work closer to 02:00am because I can be nuts at times. I always find it to be a lot easier to stay up late to get things done as opposed to waking up early for similar reasons. And thus the situation that I got myself into last night. It took me another 30 or so minutes to decongest and get some Geeky Guide blogging out of the way before finally lying down. And as is my habit before bed, I tried to get some reading in as I upped my reading goal for the year to read 300 titles.

That was probably my mistake. My Kindle told me that I had 30% left in the book so getting to the seemed a little far away.

But then I hit the Sprint.

I know I wrote about this phenomenon of sorts previously, but it may have been on my old LiveJournal blog and not this site. And because it has been a while and it entertains me, I'll write about it again.

There's a point when you get towards the end of any book when you feel everything escalate. It's not quite the climax but you know that it's close and then putting down the book becomes a near impossibility. So maybe you'll read just one more chapter to see if  the climax is as near as you think it is. Maybe you want to see what the setup is going to be like for the big finale. We all want a taste of that sort of thing, right?

But one chapter becomes two. Then it becomes four. Then you're in a race to the end of the book - hence why I think of it as the Sprint. It's not how the end of the book feels faster than the rest of it. It's when you get locked in right before the end and that it becomes next to impossible to put the book down and so you do your best to finish thing as fast as possible so you can get on with your life. This isn't meant to demean or think little of the story - if anything it's all about celebrating the really good ones and not wanting real life to get in the way.

So last night at 03:00am I got sucked into the Sprint and only reached the end sometime past 04:30am.

But it was totally worth it. More often than not it usually is.
books inner ramblings sietch life work