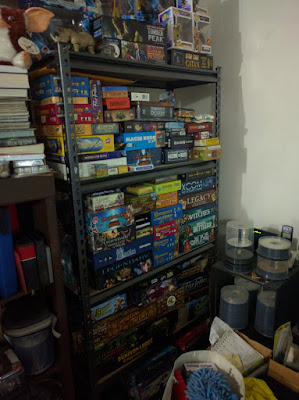 Last at O Bar was FABULOUS, to use the cliche term. But hey, a night of some of the most brilliantly talented drag queens in Asia performing numbers from memorable Broadway productions? How can anyone not find that fabulous?

So today we woke up super late but still in time to catch Gaming Library before it closed. There was a members-only sale going on and Tobie and I ended up buying a bunch of games that we had no specific plans of getting anything but of still went home with several bags of games.

Let's just say that we won't be buying Christmas presents for one another this year. I mean seriously, we ended up buying wallets that were also on sale at the venue. They weren't cheap wallets, but they were certainly clever ones.

And since when did Tobie and I buy wallets? The other week I wrote about my difficulty with purchasing seemingly more "essential" things versus geeky stuff. And yet here we are with new wallets!

To be fair, they're kinda geeky wallets since they're cool and compact. SCIENCE WALLETS!

But still, this weekend is already proving to be a very expensive weekend because of our geekery. And that's nothing to be ashamed of. We didn't spend more money than we can afford. We're not paying interesting on our credit cards since we still manage to pay the full amount due. We still eat well enough. We still pay all of our bills. So it's all good.

And yet I still feel a little guilty about things at times. But Tobie reminds me that if he thought that I was crossing the line with purchases, then he'd tell me or try to stop me. And so far he's been nothing but encouraging. And his support for my geeky passions (and my support for his) is what keeps us going strong.
gaming queer life sietch life tabletop gaming Tobie toys