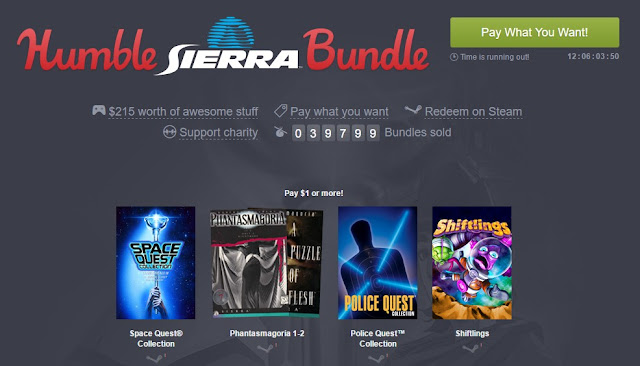 So one of the current Humble Bundle deals is the Humble Sierra Bundle. And given my lifelong love for adventure games, it was hard to say no even though (1) I probably don't have time to ever play all of these games and (2) these games are going to look super dated on a modern system. But what does it matter, right? The Sierra games made up the other half of my adventure game history together with LucasArts.

The game has all the classics like the King's Quest games and even the cheesy Phantasmagoria motion capture games. Is that what we call them? They were the ones with the super tiny, grainy video elements thrown into the mix of things. But I digress.

I already got the remastered edition of Gabriel Knight previously and now it looks like I have an original somehow adapted to work for modern systems. The other gem of this set is the more recent King's Quest game that feels like a Telltale but not. More fun stuff to play!

If only I had more time.

This is just another of many purchases I've committed to mainly because of nostalgia. At least remastered editions of some games make a bit more sense since they feature new content and other enhancements. But re-releases of original games are probably questionable. Then again, it's not like I buy a lot of new games. This way more of my game purchases are limited to items on sale instead of full-price new releases.