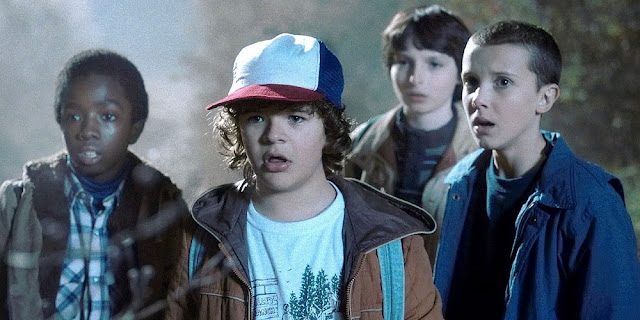 We just finished watching the second half of Stranger Things last night and it was totally worth the experience. We had been trying to space out our watching a bit more, but given the popularity of the series we were becoming increasingly nervous about spoilers. Too many people were talking about the show and that leads to more and more chances of people making mistakes.

But yeah, the series was is so many kinds of awesome. It's pretty much a love letter to so many aspects of the 1980's including Steven Spielberg movies, Dungeons and Dragons and all that good stuff. Throw in a story that could have been right at home with old favorites like The X-Files or Fringe together with a powerful cast of young actors and you have one amazing television experience. I'd totally be happy they didn't make a second season, but f course with popularity like this I'm sure that won't be the case.

Steven Universe is also back on the air and all is right in the world.We started with some lighter fare but we've had some real plot-heavy gems like Mr. Greg and pretty much everything that was covered in episodes 14, 15, and 16. I feel bad for people who don't appreciate just how awesome this series is.

Now getting started on the second season of Fargo and the first episode alone was bonkers. I'm pretty sure we're going to blitz through this season again given how good things are going. So many good shows, but so little time.
sietch life television