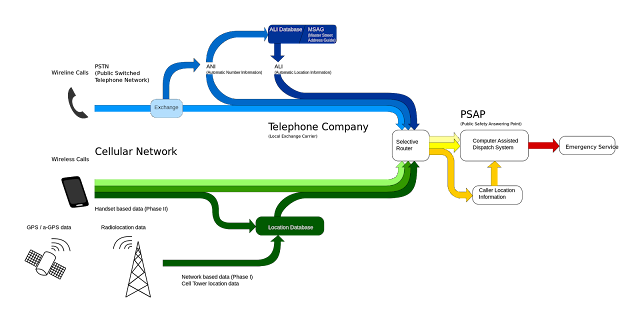 We may not all mean the same thing when we talk about 911 service. But if we're going to follow a specific definition of what makes 911, well, 911, then I suppose we have to look at the US as the primary model of the now "traditional" understanding of 911. Indulge me as I try to run through the basics in an not necessarily 100% accurate manner.

First there's a need for location identification - this is actually derived from the telephone company's records. The same technology that powers Caller ID, more technically known as Automatic Number Identification (ANI), determines the number of the caller and this is cross-referenced against the database of accounts with address information. Thus when the 911 dispatcher gets the call, they have the record available almost immediately. This has become a bit more complicated with the advent of mobile phones and VoIP calls (like Skype) since they don't have a fixed address database of locations, so an additional location approximation service is utilized based on cell tower pings and such. Most dedicated VoIP telephone service providers require users to register their 911 address every time they move the device.

The calls are routed to a call center or a Public Safety Answering Point (PSAP) and the operator will then try to determine the emergency and route appropriate resources to the scene. Thus this also assumes a full complement of police forces, firefighters and emergency medical personnel are on standby to answer calls for help.

Such services cost a fair amount of money to maintain and in the US every telephone subscriber pays a fixed fee per month to help fund those efforts. 911 is not free there - it is paid for, though the fee is somewhat nominal on a per-subscriber basis. It takes money to make a genuine live-saving service in that manner. And in the US telecommunications companies are able to make claims for tax incentives to cover the cost of routing and delivering those calls to the PSAPs.

Locally we supposedly have a preexisting 117 emergency service that is going to be rebranded as a 911 service, although stories about its effectiveness have been mixed if internet reports are to be believed. So I'm not too excited about the news and I'm waiting for full legislation that will provide clear parameters for how such a 911 service would work locally and what service level expectations would the various PSAP centers need to meet in terms of responsiveness.

What we have is a weird hotline that was once the 117 police crime reporting service and is only being renamed as a 911 service. It doesn't necessarily have all the features that I mentioned above when we look at the 17 different call centers around the country but maybe better than nothing? But it still has a long way to go before we can consider it to be a valid emergency response.
inner ramblings stop the presses