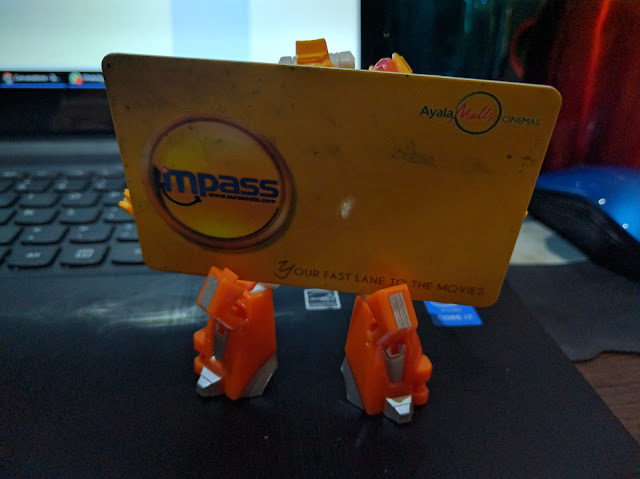 When I still lived more south in places like Pasay and Makati, Sundays were typically movie days with the ex. And around that time SureSeats became a major blessing in terms of securing good seats while still at home. The only caveat was that the reservation system required one to run to Greenbelt to claim the tickets at least 45 minutes before the screening. When you're late, you void your tickets, which isn't too terrible since you didn't pay anything up front. They did have a two strikes rule that if you kept missing your reservations, you'd then have to pay a fee to reactivate your account.

The solution to all this was the M-Pass card - a stored value card that you could present at the exact cinema itself once you had completed a booking. I only got one later in life towards the end of my time in Makati and the card really hasn't seen as much use since we moved to Cubao as the cinemas in the area are operated by Araneta. But I've still kept the card handy for the odd movie run at an Ayala Cinema.

The only ways to load the M-Pass card were at an M-Pass ticket booth (present at most Ayala Cinemas), via credit card and via GCash. As of late it has become a bit more relevant for me to keep my M-Pass card active because BGC is more Ayala territory and the Bonifacio High Street Cinemas are super near the office. We had only started watching movies there in recent months because of our tendency to stay over on Thursday nights, thus making this a pretty good time to give it a shot.

But recently the M-Pass credit card reloading facility has been unavailable supposedly due to maintenance, but that just tells me that they're either migrating to a new system or the product is being phased out or something. I don't have a GCash account and to use one I first need to go to a Globe store to activate things in line with BSP regulations. And that feels like too much effort for another virtual wallet that I first need to load with credits only to transfer them over to Ayala to load my M-Pass account.

The last option is to reload at an M-Pass counter, but the smaller theater at Bonifacio High Street does not actually have anyone who can handle M-Pass transactions like that. The closest option is Market! Market! and I think I've only gone there twice since we established the office. It may not seem that far but it is still out of the way and it's not like there's more stuff to do there versus what's readily available closer to the office.

So now I can either resort to standard SureSeats reservations and worry about the 45-minute rule again or I can look into risking direct credit card ticket purchases, which are occasionally available for certain movies. That may not be terribly bad since the Bonifacio High Street cinema is still on cash-only transactions as well for some reason, which feels very strange for a location like BGC.

I'm frustrated since I really liked the concept of the M-Pass and I've been frustrated with Gateway's lack of a proper online ticket reservation/purchasing system since forever. And now that we're finding we can watch more movies at an Ayala Cinema, we're now getting stymied by a stupid system limitation which makes the M-Pass next to useless since it's so hard to reload. Ugh.

It's not a major problem that threatens national security of anything, but it does annoy me at this moment in time as I just booked tickets for both Ghostbusters and Star Trek Beyond by walking to the cinema and going up to the ticket counter only to discover a lot of what I had just written about here.
inner ramblings moving pictures sietch life