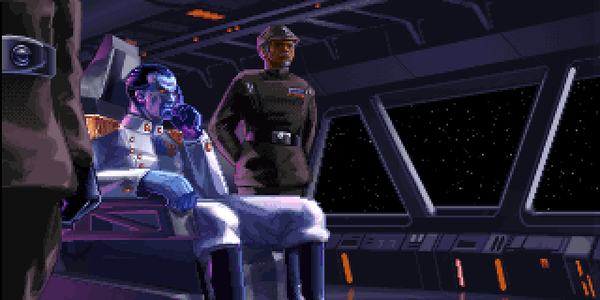 While I generally identify a bit more as Star Trek fan, that doesn't mean I don't have a healthy appreciation for Star Wars as well. If anything, I think I fell more in love with the then Star Wars Expanded Universe primarily because of the novels. I have a near-complete collection of the pre-Disney Legends novels as they're called now and I do not regret going down that road. I just felt very hurt when Disney decided to declare the old Expanded Universes as some odd alternate reality of sorts and calling it the Legends line.

With the Legends line went characters like Grand Admiral Thrawn and Mara Jade: rather iconic characters created by Timothy Zahn so many years ago. His writing efforts did a lot of define the Star Wars Expanded Universe at the time and planted the seeds for many great stories.

I was always a big Thrawn fan, even though he initially appeared solely in the Heir to the Empire trilogy that Zahn had written. Those were the firsts EU books that I had read and Zahn set a pretty high standard for Star Wars novels to come. Almost every other villain that followed was measured against him and what he had managed to accomplish in so short a period of time. He's the Sherlock Holmes of villains that made you want to root for him to succeed.

With his reintroduction into EU canon through the upcoming third season of Star Wars Rebels, I can't deny feeling pretty happy about his return. I got a little teary-eyed when I read the news and it was nice to see other folks share in this feeling through many reaction videos posted online. I think a lot of us EU-fans still want to feel like all those stories that we read all these years still matter and ultimately have value. There's a weird feeling of satisfaction when a story you've read or a character you love is recognized by the current creative team when considered to be "canon" material, thus making your fandom even more official and legitimate somehow.

I should probably talk about the artificial merits of canon in other post. That's a weird concept right there. But anyway.

In the end, it's nice that we're still seeing aspects of the old EU / Legends stories slowly come back into the current iteration of the Star Wars universe. And while I admit that the Thrawn that we're going to get in Rebels will probably be different in some ways from the Thrawn we came to respect in the books, comics and even video games, but if the trailer is any indication, it seems a lot of the core elements that make Thrawn who he is. And that's still a lot to be happy about.
books inner ramblings television