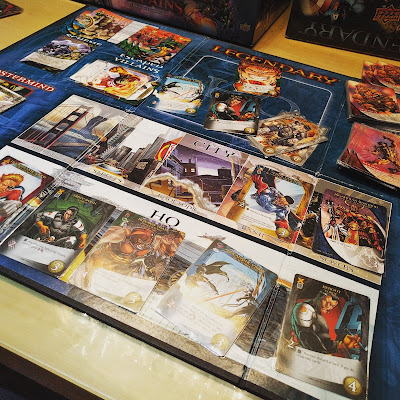 So we ended up playing Legendary all night while finishing the second season of Orange is the New Black. We literally played a single card game over and over again. But given how we have all retail-released expansions for the game thus far and have a few randomizer apps that can generate new play scenarios, the game feels pretty different every time we try playing it. And that's pretty awesome.

We finally went to bed around 08:00am and I slept all day and woke up closer to 04:00pm. Unfortunately Tobie got called for a family activity and didn't get to catch up on sleep and he coincidentally only arrived home shortly after I woke up. So I let him nap while I just mucked around the internet and tried out mobile games like Tap My Katamari and Futurama's Game of Drones.

We're both awake now and just ordered Burger King for dinner. Plans of stepping out and maybe getting errands like grocery done have gone out the window and I just don't feel like doing much. At least I made sure to get some work out of the way, but apart from that I've just been resting. And maybe I really needed that.
food adventures gaming holidays sietch life tabletop gaming television Tobie