0221B: Gaming With Extended Family 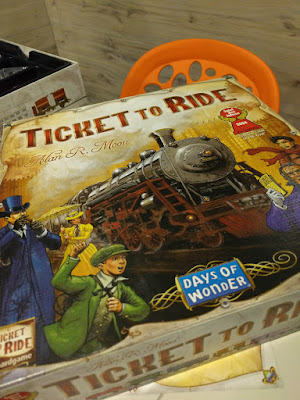 After work I met up with Tobie at the local branch of Puzzles since he was sort of watching over his visiting niece and nephew from the US while their mom was otherwise engaged. I would have gone sooner if I didn't have work to wrap up stuff at work first and of course I was feeling a little shy to join a little activity involving his family. It's just a natural part of the gay life, or at least the gay life before society fully accepts who you are and such. You always find yourself trying to err on the side of caution in order not to cause undue offense.

No regrets at all though since board games are a great socializing tool and tend to replace the need for conversation if the situation gets that bad. They had already played Tsuro and Timeline before I arrived but I did manage to arrive just in time to get into a game of Ticket to Ride. Second game ever and I managed to win with some pretty crazy cross-country routes and it was all good fun. We then introduced them to Takenoko and of course Tobie managed to come out on top for that game. It certainly made for a nice way to end the evening.

We might need to make a quick run to O Bar tonight in order to pick up tickets for the Saturday event, but of course that will mean at least a round of drinks and maybe one set of the O Divas. It would seem rude to cut and run and I'd be lying if I didn't admit that I do miss going to the bar more frequently than we do now. So we'll see how that goes - our Thursday runs have become pretty rare, but when we do go we always make sure we still get enough rest for work in the morning. The real challenge is acknowledging that we're not as young as we used to be and the definition of getting "enough rest" seems to involve a lot more sleep than it used to.

We don't actually have too many games this weekend apart from an Orpheus session tomorrow. Saturday is the big O Bar Pride Party event and Sunday we'll be watching American Idiot at wherever that new Globe concept store is supposed to be. I better look for directions later in the morning - assuming the venue is prepped and ready for showtime. I see way too much construction in the area where I understand the venue to be and that does worry me.
all the world's a stage cultural victory family gaming O Bar queer life tabletop gaming Tobie