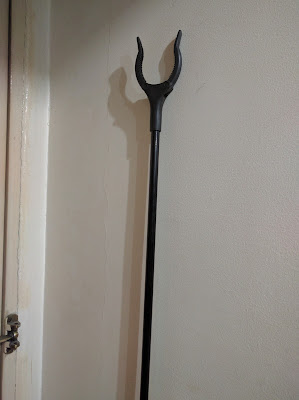 We own of these toy claw thingies because Tobie picked it up at random some time back. He has continually insisted on its usefulness and value, particularly when it comes to retrieving objects that all behind cabinets or the fridge. It's not exactly the strongest thing around given it's made mostly of plastic. But despite it's lousy gripping power, it has had a few moments of glory.

Today Tobie managed to kill a roach with the claw.

I had arrived home after a long UberPool ride home to find that all of our spices were out on the dining table along with the claw while Tobie was in the bathroom. I eventually learn that he had found a claw in the cabinet where all the spices and condiments are stored. He had lost sight of the roach and so it was a little tense since it was in a storage location for food.

He eventually spotted it again, but it was still in the cabinet. We didn't want to spray insecticide since it would risk contaminating the bottles left in the cabinet, and so I started tracking the insect with a bottle of alcohol. I had tagged the thing a few times so he was already woozy and he finally fell out of the cabinet to land on the counter. I called Tobie's attention and he swooped forward...with the claw.

In one move, he somehow managed to snag the roach with the claw. It was insane. He promptly took it out into the hallway and made sure it was fully dealt with. He seriously used a toy claw wand to catch a roach. And I thought it was crazy when I came home to find the dining room all bloody and Tobie fast asleep with sloppy bandages around his finger while firmly gripping an orange. Literally an orange.

Never a dull moment at the Sietch.
sietch life Tobie