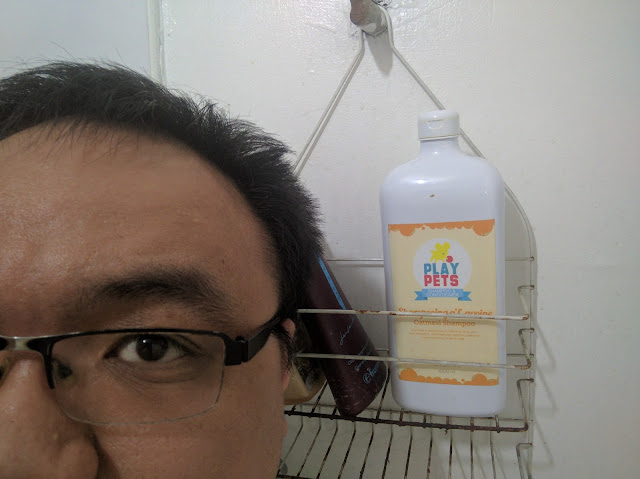 My toenails are getting a little long. When my toenails are long, then I really know that it's time for a haircut. Ever since I went back to crew cuts in 2012, I could generally get away without getting a haircut more than once a month. And even then, a monthly haircut is more to keep things looking neat and not necessarily because It was looking totally unkempt or that my hair had returned to a length that actually required hair product to keep it in place or something.

My needing a haircut also acted as a reminder that Yoshi was probably due for grooming as well. Before I'd actually drop Yoshi off at the groomers then would proceed to get my own haircut nearby. More often than not, my haircut would finish before his and I'd do my best to kill time elsewhere since Yoshi would get impatient to leave once he'd see either me or Tobie at the waiting area of Pet Express.


Yoshi's grooming experiences were always rather funny. The guys at Pet Express loved him since the was very well-behaved and didn't give them much trouble. That was mostly true, unless either Tobie or myself would be visibly waiting for him in the reception area. Since there's only  glass wall between the grooming area and the waiting area, Yoshi could clearly see us waiting. And for as long as he could see either of us, he'd be barking at the top of lungs to be let out of the holding cages or he'd be trying to jump off the groomer's table if he was still getting groomed. Tobie and I quickly learned to stay away during his grooming, but we never went too far since we wanted to be able to pick him up right away soon after.

I missed those sessions since more often than not I was the one who'd bring Yoshi right after my night shift work and Tobie would either be asleep or on his way to work. It was one of those activities that we'd mostly do together, and in his last few months I was actually trying my best to groom him myself with the aid of a pet-appropriate shaver. The results were not always fabulous, but I'd like to think that I got the job done.

I still makes me sad when I write these posts about missing Yoshi, but I think it's important to get it out of my system in order to help me move forward. It feels a bit masochistic to go through the efforts of going over different photos to find precisely the right one for this blog post. But hey, Yoshi always deserves the best. He's always worth the effort.
inner ramblings sietch life Yoshi