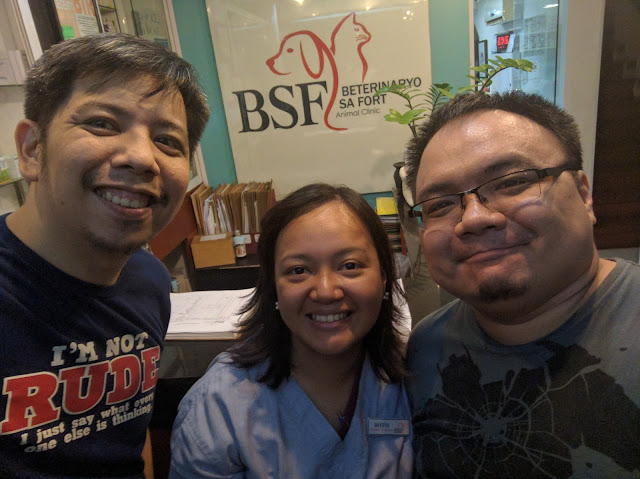 Today after work we set aside time to return to Yoshi's vet for the past year, Beterinaryo sa Fort. It was a bittersweet return after the events of this week but we wanted to make sure that we met up with Doc Rotsi, Yoshi's primary vet through all this, to extend our thanks for all that she had done. She had become quite the Yoshi fan over the past months and I appreciated her genuine love and care for Yoshi and all the work that went into trying to keep him. It's because of her that Yoshi got another 6 months after what was pretty much a terminal diagnosis last December.

We also brought all of Yoshi's extra medicines and renal diet tins to share with other dogs dealing with the same condition. It wasn't cheap to keep up with Yoshi's routine and I'm sure that not everyone is just as open to investing that much in a dog. With luck the additional supplies we shared will help someone else keep their beloved pet alive just a little bit longer.

As one would at a wake, we related what happened on his last day, swapped funny stories about Yoshi and she really had a lot to say about the uniqueness of his personality. She also reiterated that we were great fur parents for all we had done for Yoshi and she strongly felt that we should take on another dog in the future. No rush of course, but she stated repeatedly that we should share that love with a new pet sometime. And it was nice to hear, admittedly.

So we'll see how things go. For now we need to deal with Yoshi's absence from our lives. As for the future, we'll see what comes our way.
aminals health sietch life Tobie Yoshi