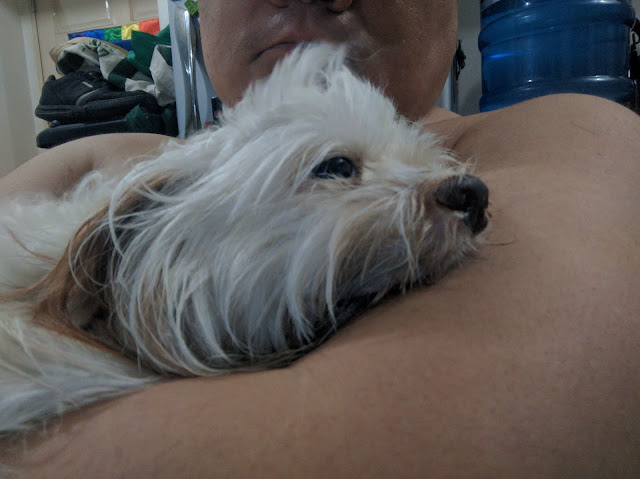 It's painful to type those words but I need to be honest with myself and all  of you, He isn't doing at all well and I feel like we're going through a very sharp drop in his condition over the past few days, or even between this morning and tonight. I don't think he has much longer to go and all we can do is try to make him feel as comfortable as possible.

I'm typing this entry with one arm as keeping Yoshi in my other arm seems to have calmed him down. He just had another serious convulsion spell before this and it was pretty scary. People ask if he's in pain and it's hard to tell since Yoshi has always been a stoic dog. Despite all the needles and blood extractions over the past 6 months, he's hardly made a sound. Now we're getting a few isolated whimpers bubbling up from somewhere deep.

He can barely stand anymore and he's refusing to take in water and baby food that we're force-feeding with a syringe. The few times that he managed to get up earlier today involved him inching close to either Tobie or myself and then later trying to find some isolated corner of the Sietch to hide in. He's gone to places he hasn't typically gone to before as if he's looking for a safe and secret spot. Tobie wonders if he's ashamed at how weak he is. Maybe he's just feeling super vulnerable.

Yoshi is dying and we've tried to say our goodbyes but I don't think we'll ever feel like we've had a chance to say everything that we want to say. Yoshi completes our little family unit and it's never easy to let go of a family member.

If things get worse, we may consider putting him to sleep so that he doesn't suffer through too much pain. We're not sure yet - we don't want to give up prematurely. But then we also have to accept the facts and the obvious direction we're headed. We need to do what is best for him even if it doens't necessarily feel like it's best for us.

I hope he goes peacefully. I hope he feels loved. I hope he goes to a happier place than what his life has been like over the past few weeks. I wish him all the best in life and beyond.

I love Yoshi. We love Yoshi. Yoshi is loved. And I know we all have to let him go soon.
aminals deaths family health sietch life Tobie Yoshi