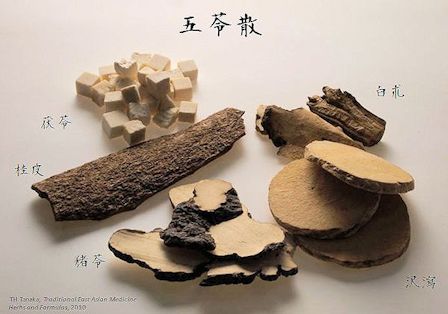 I generally consider myself to be a man of science. I have a strong appreciation for the pharmaceutical industry in terms of the fight against various diseases and I generally believe what Western medicine has to say. But with the prior pronouncement that Yoshi might only has 2 weeks left to live, that helped make me a bit more open to other possibilities. And with my sister bringing her own dogs to a veterinarian that practices Traditional Chinese Medicine (TCM), I figured it was worth a shot, even just for a consultation.

And so I brought home a rather expensive bottle of Wu Ling San powder, or Five Ingredients Powder with Poria. The doctor's instructions were to mix two rounded/heaping scoops of powder in about 5mL of water. The resulting paste is administered via syringe and he gets it twice a day.

Yoshi was pretty down when I first arrived back from Singapore yesterday, but 3 doses later and he seems a lot better. Whereas yesterday he barely stood up and just wanted to stay in bed, today he has been a bit more active and actually goes around more. Yesterday his dizzy spells left him rather disoriented and at times it felt like he didn't even recognize us. Today his eyes look a lot sharper and he seems more alert.

But I'm trying not to jump to any conclusions here - after all he has only been on the powder for just over a day. I curious to see how this might effect his various medical tests on Monday. If we start to see changes in those numbers, then I'd be pretty impressed indeed.
health sietch life Yoshi