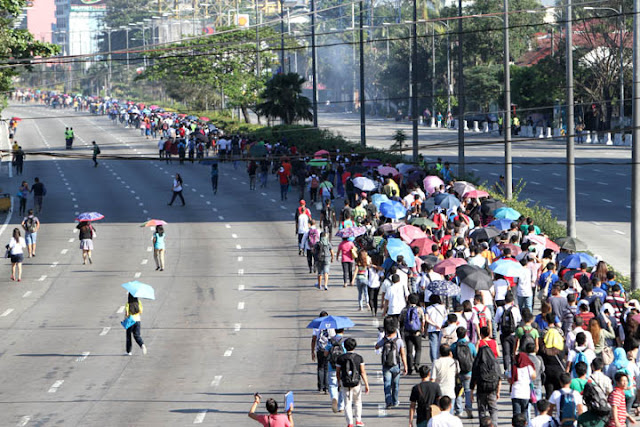 So the special traffic re-routing scheme began in earnest today leaving key parts of major roads like EDSA and pretty much all of Roxas Boulevard dedicated to APEC delegates. Traffic was bad enough for the Philippine National Police to advice people to just stay home to avoid the traffic - sadly an option unavailable to most of the working population in Metro Manila. And thus those people who have braved the traffic situation have been reduced to walking down major roads since it was still a faster option than waiting for a ride or being endless re-routed away from key areas of the city. 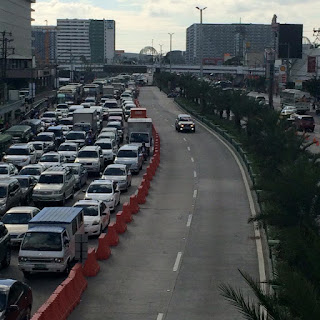 Traffic reached a point that a woman actually ended up giving birth while in traffic since they were no longer able to get to a hospital in time. And the conference isn't even in full swing yet! We're just waiting for delegates to arrive. And thus we're starting to see some pretty iconic imagery that says a lot about this country such as this image on the right.

This one image has been interpreted to mean any number of things. Personally I see this as a reminder of the significant economic equality in this country and the lack of inclusive economic growth, as the popular buzz term goes. Things like the APEC are supposed to benefit the whole country and yet here we are being made to suffer on the sidelines while we put more than our best foot forward for delegates but one that does not actually exist. We're telling a lie in a terrible manner since any delegate traveling down EDSA just needs to look to their right and see just how crazy our traffic is. Some people try to sweep dirt under rugs as guests arrive. We just set it to one side and ask guests to pay no attention.

Sure, the traffic situation is more the result of poor infrastructure, the lack of a an actual mass transit system and too many jobs being focused here in Metro Manila instead of spread more evenly across the country. I've always stated that it's a complex problem which will require a lot of political will and a lot of sacrifices on the part of the average citizen as well before things get fixed. But bullshit like this week has nothing to do with addressing those problems. It's just the government making the best of a ridiculous situation.

I'm just glad that I had a flexible enough working situation that allowed us to decide to have everyone work from home this week. I wouldn't want anyone in my team having to go through that nonsense.