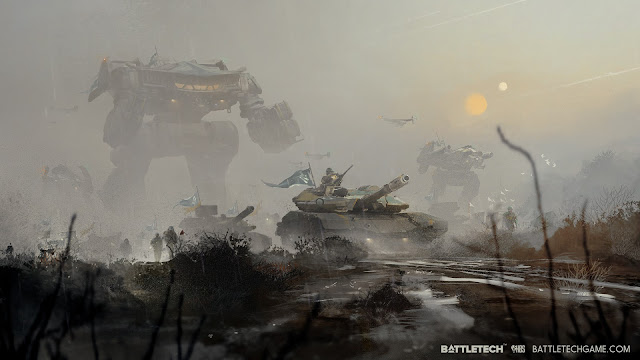 I'm not quite sure why I haven't gotten around to talking about the new BattleTech Kickstarter that launched last week. As is the way with popular franchises that go to crowdfunding, it has been a pretty crazy ride so far. It earned over a million dollars in its first day, which is four times the initial funding goal and now we're in full stretch goal city as things get better and better. I'm pledged for the $50 tier that provides access to the various e-novellas that Michael Stackpole has committed to write, which is really my main draw to this project since I've always loved how he handles this franchise.

I first got into the franchise because my uncle got into the first MechWarrior game for PC. It was such a novel world driving the game and he eventually got me to be his keyboard co-pilot while he handled the joystick control for driving the mech. Thus my"job" was to set weapons configurations and loops, handle mercenary negotiations and other fun bits.

But the game was only the stepping stone for me getting into the books and that really changed my life. Availability of the books locally was always a mixed bag and sometimes you'd find loads of them on shelves while other times would result in no new books appearing for months. The franchise introduced me to Michael Stackpole, whom I followed into his work with the Star Wars franchise as well. He's the first author I ever wrote a fan letter to and I wish I still had a copy of that email. So yeah, I have a lot of good memories about this franchise.

And now we have a turn-based strategy game in the works and I'm eager to see how this will all pan out. The project is already funded, so it's now just a matter how far things will go and how many stretch goals we'll manage to unlock and it's all going to be stellar.
books computer gaming gaming inner ramblings sietch life