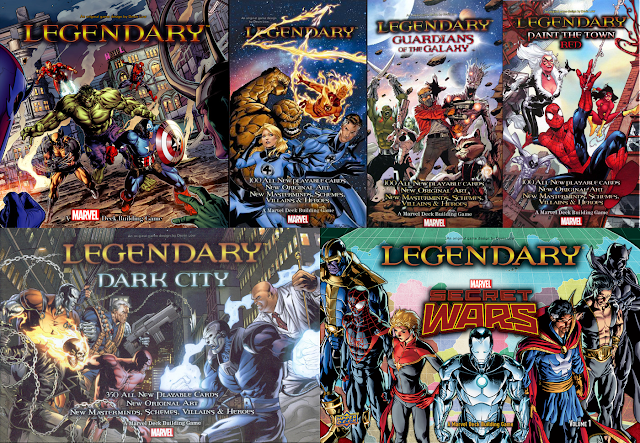 So our resolve to seriously get into the Legendary Marvel Deckbuilding Game has resulted in us now owning all of the main expansions for the core set. There are still Legendary Villains and Fear Itself to potentially get in the future, but it's still pretty crazy how quickly things have progressed. And yeah, this also represents a fair amount of money well-spent on gathering the different sets and also buying sufficient plastic card sleeves to cover all the cards from the different expansions.

But don't knock it - it's a really fun card game and one with so much play potential and diversity because of how things were designed. Each Villain Mastermind presents a new challenge but then each Scheme they try to implement also creates a new play experience for everyone.

And it seems silly that I keep talking about this one game, but admittedly it's like our go-to game right now. We can always squeeze in a round or two before bed and slow times during weekends tends to end up with us facing enemy after enemy in different scenarios with different heroes.

So maybe we'll get over our Legendary mania soon enough. Perhaps we'll branch back out into the other games that we have in our rather sizable collection. There will always be more game nights and thus more fun to be had.

So big thank to Tobie for taking the lead in gathering the the different sets and actually finding them, even the one rumored to be out of print.

But now I'm also considering getting into Star Trek: Fleet Captains. Has anyone else played the game?
gaming sietch life tabletop gaming Tobie