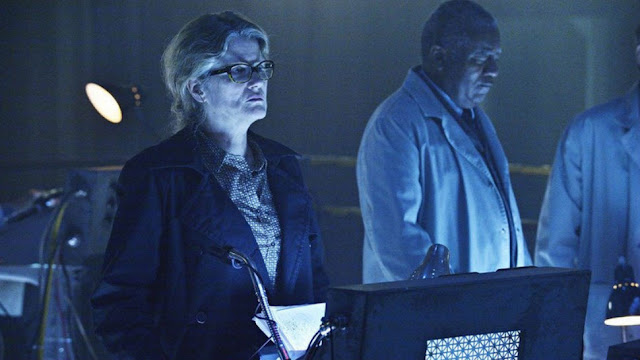 "Hope is the luxury of those unburdened by fate."
- Katarina Jones, 12 Monkeys S01E11 "Shonin"

So our Saturday game got cancelled and we ended up watching stuff we had downloaded previously. And part of last night's run was finally finishing up with the TV adaptation of 12 Monkeys. The original movie was quite trippy, but it was certainly memorable for a number of reasons. And the TV show has nicely been trying to tie back to the movie and capture some of the tone as well.

I was particularly drawn to the character of Katarina Jones, the woman running the time travel machine and thus is the leader of the little human enclave in that post-apocalyptic future. She's a scarily driven woman who has nothing left but her dedication this possible solution to the fate of the world - sending a man back in time to change things and prevent the virus from infecting the world and killing over 90% of the global population. And the lengths she is willing to go in order to achieve that dream was pretty impressive. Scary as well, but still quite impressive

Some of the greatest figures in history were ones that seemed like they had little to no choice with respect to what they could do. They often felt that their role in history or the skills that they had obligated them to a certain course of action. They all felt they were doing the best thing for their community or their country but in the end history determined whether or not their actions were indeed noble. And I felt the show nicely captured all that complexity in this character.

It's not the greatest show in the world, but we certainly enjoyed it. And man, they really pushed all the complexities of time travels without going full Primer or something. Fun times.
inner ramblings sietch life television