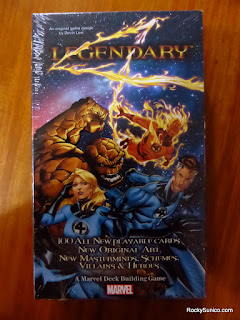 So Tobie managed to find a copy of Legendary: Fantastic Four as a belated addition to my early birthday gift. After his initial purchase of Paint the Town Red and Guardians of the Galaxy, we became pretty committed to the whole Legendary line in a whole new way.

But in our eagerness to get the other expansions, we came across news that this Fantastic Four expansion would no longer be reprinted, which sort of aligns with Marvel's efforts to bury franchises like this given they don't own the movie rights. And given the set had come out back in 2013, I was pretty nervous that we wouldn't be able to get a set of our own.

But here we are, less than a week after Tobie got the other expansions and we have the set in hand. I just went over the rules and skimmed the cards and I am pretty excited to give it a shot! Tobie is amazing in this way - he always manages save the day, one way or another.

Tobie is my hero - something I told him in passing even before he found my missing Kindle for me. He's always there for me and he always manages to say the right thing or figure out what to do when my brain trips all over itself and just borks down. And I love him even more for all of his awesomeness.
gaming sietch life tabletop gaming Tobie