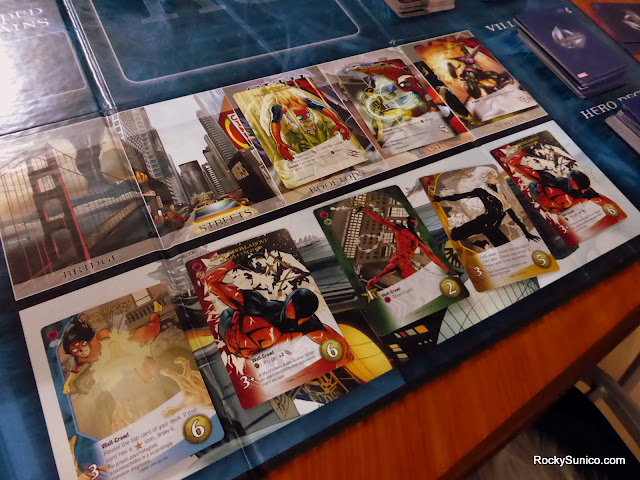 Tobie got us the Legendary expansions Paint the Town Red and Guardians of the Galaxy as early birthday gifts, and this has led to a significant number of games played over the weekend. The game has gone from being quite entertaining to really compelling. Then again, these two expansions really touch on some of my favorite aspects of the Marvel comics universe - Spider-Man and the Guardians of the Galaxy. This presents a weird contrast between street-level crime stories to intergalactic conflict.

Missions have ranged from trying to defeat Thanos himself to trying to see past Mysterio's illusions in order to defeat him. The expansions have introduced some interesting new card mechanics into the game, but more importantly some great new characters and challenges to make for interesting games. This game is getting increasingly more fun to play with each new expansion - and now Tobie and I are pretty eager to get our hands on the other sets. The only set that may be difficult to find will be the Fantastic Four expansion, only because Marvel seems to have announced that they have no plans of reprinting the set. We suspect it's related to the efforts to stifle the Fantastic Four franchise given Marvel doesn't own the movie rights, but we'll see.

But yeah, this is becoming a bit of a staple game now given the replay value it offers. Fun times indeed
comics gaming sietch life Spider-Man tabletop gaming Tobie